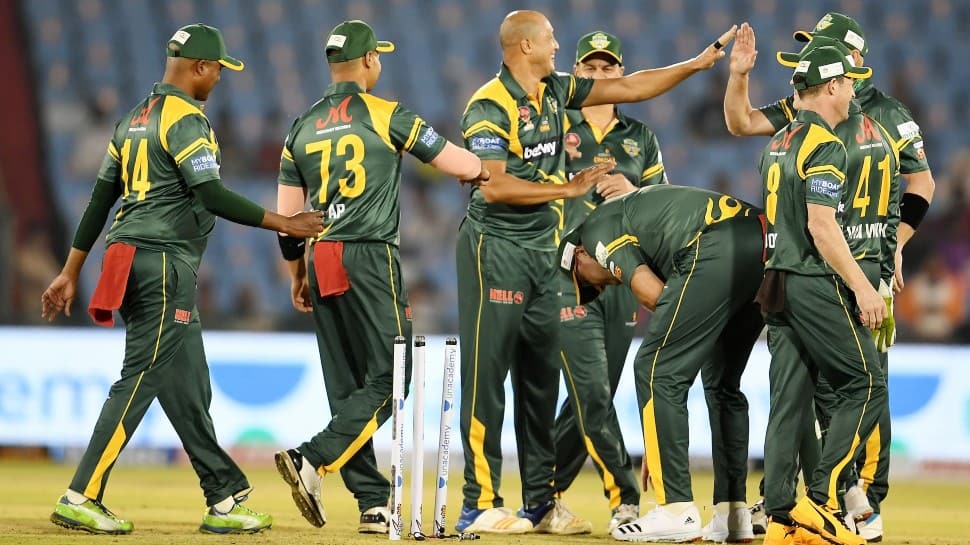 In the 11th match of the Road Safety World Series 2020/21, South Africa Legends outclassed England Legends by 8 wickets to register their second win in the competition at Shaheed Veer Narayan Singh International Cricket Stadium in Raipur.

After opting to bowl first, the South African bowlers were all over the English batsmen as they bundled out Kevin Pietersen-led England Legends for just 121 runs in 18.1 overs following which Jonty Rhodes-led South African Legends chased down the 122-run target with ease in just 13 overs.

The Africans were off to a great start thanks to openers Andrew Puttick and Morne van Wyk who stitched together a good partnership before the former was bowled by James Tredwell for 23. Van Wyk could not get his half-century after he was stumped by wicketkeeper Phil Mustard off left-arm spinner Usman Afzaal for 46.

The stage was set for South Africa's win and captain Rhodes completed the formalities with two fours and a six in the 13th over to help his team over the line.

Earlier, off-spinner Thandi Tshabalala stole the show with the ball as South Africa bundled England out for 121 in 18.1 overs. Opting to field first after winning the toss, Rhodes's bowlers had made England batsmen's life difficult with disciplined bowling.

Tshabalala was the most successful bowler with three for 26 and his victims included Kevin Pietersen, Jim Troughton, and Chris Schofield. Meanwhile, pacers Makhaya Ntini and Zander de Bruyn took two wickets each.

After executing a straight drive in the five boundaries that he hit, a slog against Tshabalala cost Pietersen his wicket. While going for a slog, he mis-hit Tshabalala's flighted delivery with a bit of turn trapped him LBW for 12-ball 21.

After getting Troughton caught behind, Tshabalala then dismissed left-hander Schofield. Bowling round the wickets, Tshabalala pitched the ball a little outside the off which Schofield chose to leave, but it miraculously came in to break his stumps.

De Bruyn was another bowler who got two crucial wickets of Darren Maddy (25) and Chris Tremlett (23).

Meanwhile, the victory helped South Africa Legends move to third spot in the points table. They now have eight points from three games and are above fourth placed England Legends due to better run rate.