Urvashi Rautela has now revealed her Karwa Chauth look and Rishabh Pant's fan are trolling her on her Instagram handle. Know more below

Bollywood actress Urvashi Rautela's saga with cricketer Rishabh Pant is never-ending it seems. After all the controversy surrounding her statement about Pant amid rumours of their alleged affair and then eventual turn of events with Urvashi going to watch India play in Dubai and then apologising to then make a U-turn on the apology. She then flew to Australia days after Pant flew with Team India for the T20 World Cup 2022. Fans feel she has been bullying Pant through these acts. On Tuesday, Uvashi shared another photo of her on Instagram in which she could be seen wishing the fans on the occasion of 'Karwa Chauth'.

Check out her post below and the fans reactions below: 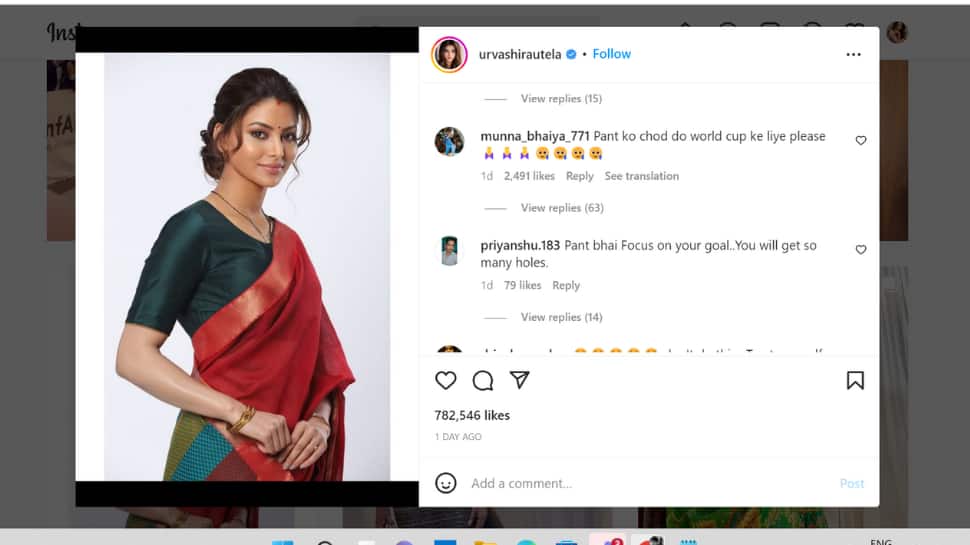 India play their first match at the T20 World Cup 2022 on October 23 vs the arch-rivals Pakistan at the iconic Melbourne Cricket Ground (MCG) and chances are that Urvashi may attend that game. She had earlier attended the matches during Asia Cup 2022, both the India vs Pakistan matches. Pant played one match out of these two.

Pant's place is not certain in the team with Dinesh Karthik already there in the squad. The team combinations will have to be talked about before the final call is taken on the playing 11 for Pakistan. The Babar Azam-led side has had good run vs India in the past 3 matches. India and Pakistan have played against each other in 3 T20Is in the last 365 days, India losing twice and Pakistan facing defeat only once.

Despite Pakistan enjoying this run, it will be India who will start as favourites as they have the experience of playing in Australia and their batting is anyday better on paper than Pakistan. Having said that, it will be all about how both teams manage their nerves on the given day and play better.