Knight Riders' skipper Dwayne Bravo couldn't believe his eyes while the television commentator Danny Morrison was in utter disbelief too. 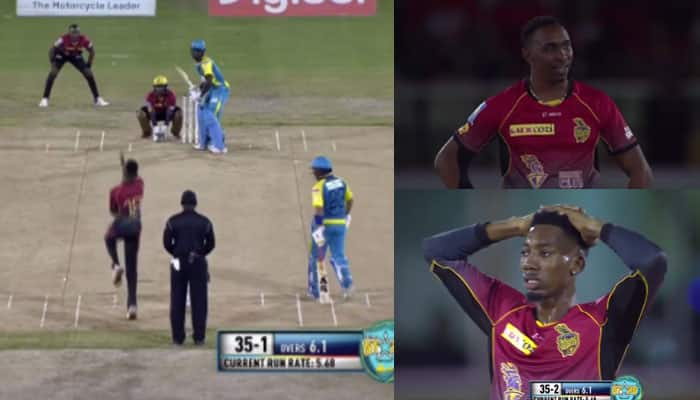 New Delhi: One of the most bizarre incidents took place in the Caribbean Premier League 2017 encounter between Trinbago Knight Riders and St Lucia Stars after the ball went to reach the boundary despite hitting stumps as the bails didn't fall off.

During the 7th over of the Stars’ innings, left-arm spinner Khary Pierre was bowling to West Indian batsman Andre Fletcher. The right-handed batsman attempted to go for a maximum but completely missed the ball which went on to hit the stumps. Lucky for him, it didn't disturb the bails fully and rather went on to reach beat the wicket-keeper and reach the boundary rope.

Chewing gum on the stumps pic.twitter.com/Hhe4I8Lv7u

The umpire signaled it as byes as Fletcher got lifeline. Knight Riders' skipper Dwayne Bravo couldn't believe his eyes while the television commentator Danny Morrison was in utter disbelief too.

It was in the end a victory for the Knight Riders.

Axar Patel to be preferred over Kuldeep Yadav as Ravindra Jadeja's replacement: Report