Top five Sameer Anjaan songs which are hard to forget

Sameer Anjaan made it into Guinness Book of World Records on February 17th, 2016 for writing 3,524 songs. 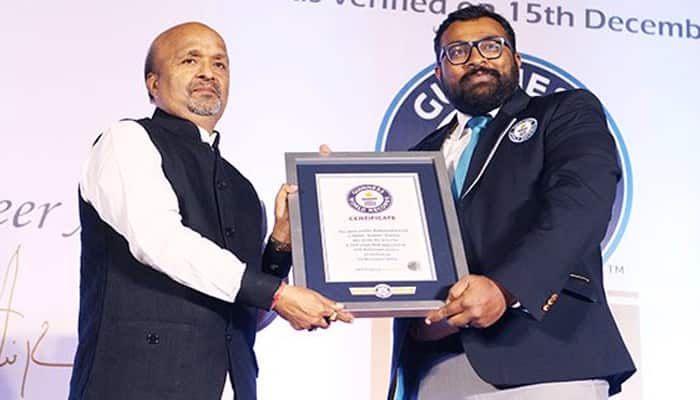 New Delhi: Popular lyricist Sameer Anjaan made it into Guinness Book of World Records on February 17th, 2016. Anjaan who has given some of the best songs to this industry, kick-started his career with film 'Bekhabar'. He has penned as many as 3,524 songs.
Known for his unique style which touches upon a lot of human emotions in the songs: the popular lyricist has also earned many Filmfare Awards. Apart from blockbuster songs like 'Tum Dil Ki Dhadkan Me', 'Aapke Pyaar Mein ', 'Mera Dil Bhi', 'Nazar Ke Saamne ', there are many other songs which have stolen our hearts. Here's taking a look at some of the songs that moved audience and melted their hearts.

This song is an ode to a sad love story. Not just the words, the whole picturization and music touched the hearts of many music lovers.

A cheerful romantic number, this song became an instant hit. It struck a chord with the youth for its lyrics and music and showcased a beautiful chemistry between Shah Rukh Khan and Kajol.

A naughty number portrayed by Saif Ali Khan – this song captured many hearts as a great dance number in those times. Again, a hit among youngsters, Saif's performance just added to the whole success of the song.

Amitabh Bachchan crooned this lovely song in this family drama. The song gleaned a lot of praise for its originality and smoothness. The lyrics are simple yet heart-touching.

Aishwarya Rai Bachchan gave an impressive performance in this song – but it was not just her looks. The song showed the versatility of Sameer.