Ministry sources said that the clearing of the oil is at an "advance" stage and a team of Central Pollution Control Board (CPCB) also visited the port for monitoring the situation. 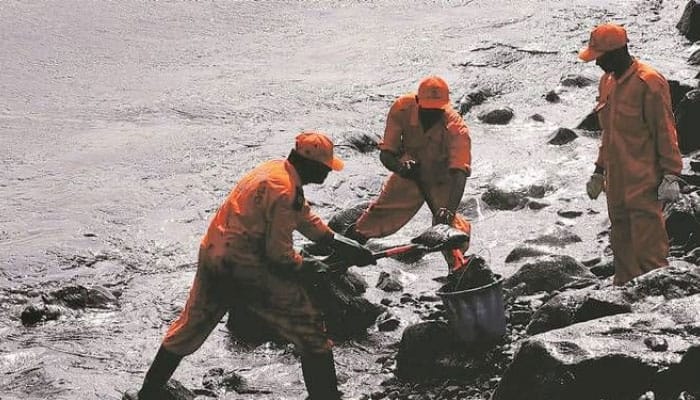 New Delhi: The Environment Ministry is likely to issue a show cause notice to the Kamarajar Port (Ennore port) in Chennai for "mishandling" the oil spill following a collision between two ships last month.

Ministry sources said that the clearing of the oil is at an "advance" stage and a team of Central Pollution Control Board (CPCB) also visited the port for monitoring the situation.

"It is very likely that a show cause notice will be issued to them, asking as to why they should not be penalised for mishandling the situation," a source said.

On January 28, two shipping vessels had collided outside the Kamarajar Port at Ennore, resulting in rupture of a ship and oil spill.

With the incident raising environmental concerns, the Centre had recently said a total of 65 tonnes of sludge has been removed so far and over 90 per cent of the work completed.

Another Environment Ministry official said that the CPCB team has also completed its visit to the port for monitoring the situation.

"The team has issued directions under the Water Act and Environment Protection Act. Clearing (of the sludge) is at an advance stage," the official added.

The mishap had occurred at around 4 AM on January 28 when M T BW Maple, with a flag of Isle of Man, was leaving the port after emptying Liquefied Petroleum Gas (LPG) and M T Dawn Kanchipuram, loaded with petroleum oil lubricant (POL) was on its way to the berth at the Kamarajar Port at Ennore.

The sea water had blackened and some turtles were found dead near the north Chennai shoreline following the incident.

The government had said that all measures were being taken to manage the situation created by the oil spill even as a probe is underway to ascertain its causes and contributory factors.