UAE moved top of the table in Group A with four points from two matches while second-placed India still remained in the hunt for a knockout berth with three points from two outings. 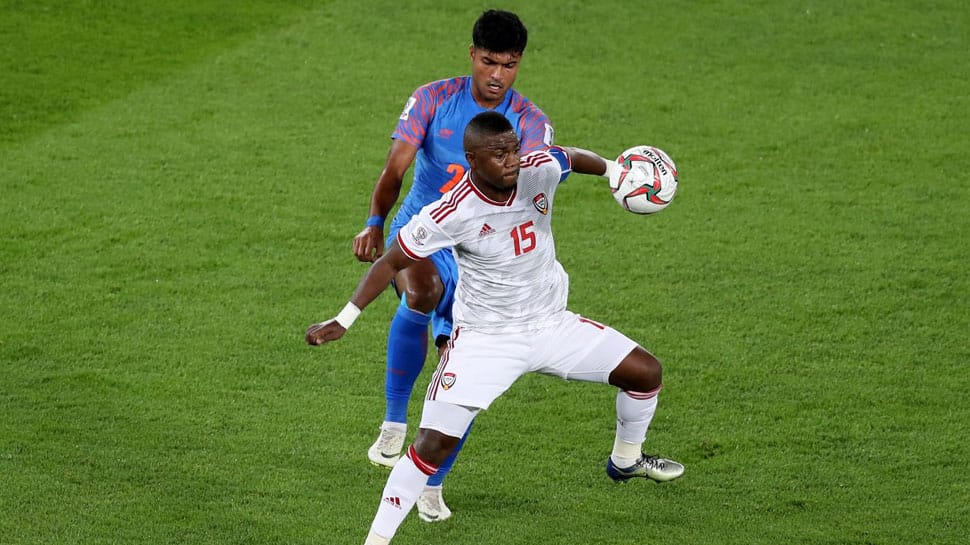 India left their scoring boots and luck behind while hosts United Arab Emirates found both after a subdued opener to record a 2-0 win in the AFC Asian Cup at the Zayed Sports City Stadium in Abu Dhabhi on Thursday.

Khalfan Mubarak (41') and Ali Ahmed Mabkhout (88') scored for the home team, entering the game in some desperation after a 1-1 stalemate with Bahrain in the tournament opener.

UAE moved top of the table in Group A with four points from two matches while second-placed India still remained in the hunt for a knockout berth with three points from two outings.

India had drubbed Thailand 4-1 in their opening encounter Sunday but the Thais got their campaign back on a track with a 1-0 win over Bahrain in the evening fixture.

India made a positive start in both the halves and created many chances, but paid dearly for lacking the finishing touch.

The Blue Tigers missed three big chances in the first half and while they created opportunities after the break too, India were denied on two occasions by the framework.

On expected lines, the United Arab Emirates enjoyed possession initially but, to the surprise of many, India had more shots at goal and dominated proceedings by keeping the opposition defence busy.

Sandesh Jhingan's free header off a corner by Anirudh Thapa, which was won by Pritam Kotal, went off target. India could have been 1-0 up as early as the seventh minute at the Zayed Sports City Stadium.

Then, unmarked at the far post, Sunil Chhetri's header after Thapa squared it for the second highest active goal-scorer in international football, was brilliantly saved by UAE custodian Khalid Eisa.

If those misses in the eighth and 23rd minute gave India the belief that they will be able to fight their fancied opponents, in coach Stephen Constantine's words, toe-to-toe, they also may have made the Blue Tigers a bit restless.

And UAE, positioned 18 places above the 97th ranked India in the FIFA chart, used that to their advantage when Mubarak charged forward and latched on to a ball by Ali Ahmed Mabkhout, who ran in from the right.

It was not that the Indian defence was in disarray but they would have done well to clear the ball at first instance. Thapa, the team's youngest member at 20, could not get there in time while Anas Edathodika and Jhingan also could not come in the way of Mubarak, who scored his first international goal.

Entering the game after a 1-1 stalemate with Bahrain, UAE required full points full points, and the relief was palpable in their camp when Mubarak broke the deadlock.

The joy would have been short-lived for the home team had the talismanic Chhetri's attempt not missed the target by a whisker in the 43rd minute, this after the Indian captain had the UAE defenders in splits and managed to cut one through one of the gaps with Eisa noweher in the picture.

Down by a goal at the break, India were not to be disheartened and made their intentions clear in the second half.

Constantine brought in Jeje Lalpekhlua in place of Halicharan Narzary and the Mizo forward, who scored two minutes after coming off the bench in the 4-1 mauling of Thailand, nearly did an encore in the 53rd minute. Jeje's volley went inches off the post.

UAE got their act together and troubled the Indians occasionally and they also had one of their attempts blocked by the bar.