Arsenal's Dani Ceballos out of Leicester clash with hamstring injury

Arsenal, who are currently standing at the fifth spot in the Premier League standings with four wins from 11 matches, will lock horns with Leicester City on Saturday at King Power Stadium. 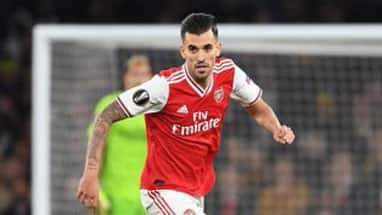 Arsenal midfielder Dani Ceballos has been ruled out of his side's upcoming Premier League clash against Leicester City due to a hamstring injury.

Confirming the news, Arsenal said that the 23-year-old from Spain sustained the injury to his left hamstring in Portugal and that he is currently being assessed.

Arsenal boss Unai Emery said that though Ceballos has suffered a small injury, he is most likely to remain unavailable for the next few months.

"He has a small injury but I don't think he is [going to be available] for the next weeks," Mirror.co.uk quoted Emery as saying to BT Sport.

When quizzed if Ceballos' absence could result in recall of either Mesut Ozil or Granit Xhaka for Leicester clash, Emery indirectly denied the same.

"We are going to prepare for the match with the players, some players had a rest today and maybe someone who played this evening," he said.

Ceballos has appeared in all the matches for Arsenal since his arrival to Real Madrid on loan. His only goal for the Gunners till date came during the side's 4-0 win over Standard Liege in the Europa League last month.

Arsenal, who are currently standing at the fifth spot in the Premier League standings with four wins from 11 matches, will lock horns with Leicester City on Saturday at King Power Stadium.