Cristiano Ronaldo’s actions caused a major stir, with Coca-Cola’s share price falling by $4 billion as the world’s most famous footballer urged his millions of fans to ditch the drink in favour of water. 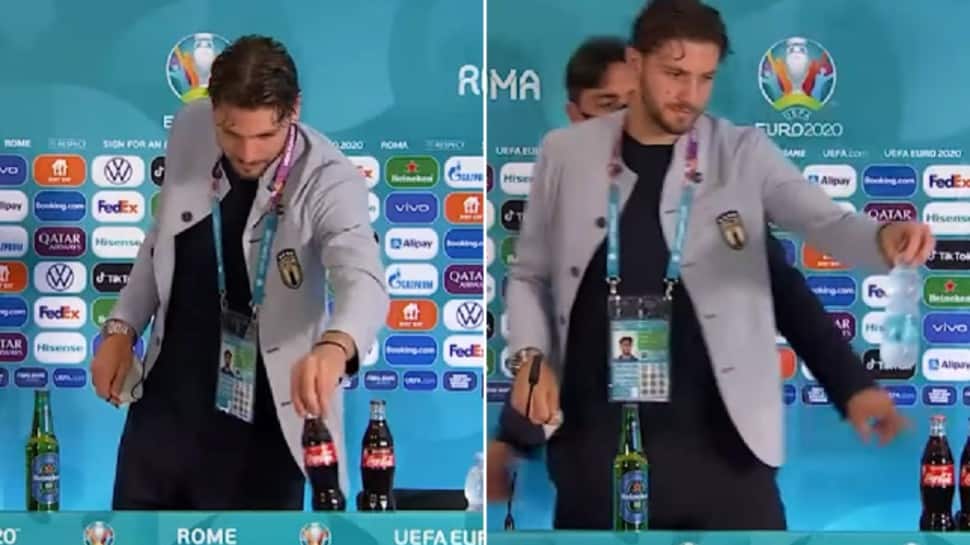 Coca-Cola company continued to take one hit after another at the ongoing UEFA Euro 2020 tournament as another top footballer gave it the snub on Wednesday (June 18). Italy’s Manuel Locatelli, who was the start of his side’s win by scoring twice against Switzerland, followed the example set by Portugal’s superstar Cristiano Ronaldo by setting aside the Coca-Cola bottles out of the camera’s view before sitting down for the press conference.

Ronaldo had looked horrified when he spotted the fizzy drinks on the table when he spoke to the media earlier this week, placing them out of sight of the cameras and holding up his own bottle of water to the camera instead.

Ronaldo’s actions caused a major stir, with Coca-Cola’s share price falling by $4 billion as the world’s most famous footballer urged his millions of fans to ditch the drink in favour of water. There were similar scenes on Tuesday night when France midfielder Paul Pogba gave his own post-match press conference, though this time Manchester United’s devout Muslim removed a bottle of Heineken beer from the table.

Now Locatelli has become the third player to take on Euro 2020’s sponsors, removing two bottles of Coca-Cola from their place front and centre of the table and putting his own bottle of water directly in front of him instead.

As per a report in The Daily Star, the prices of the beverage company dropped by 1.6 per cent and the value went down from $242 billion to $238 billion.

Ronaldo, who also appears to be one of the most fittest athlete, is not a fan of the carbonated soft drinks and endorsed people to consume water instead. The video of the incident went viral in no minutes.

Cristiano Ronaldo was angry because they put Coca Cola in front of him at the Portugal press conference, instead of water!

He moved them and said "Drink water" pic.twitter.com/U1aJg9PcXq

Portugal skipper Cristiano Ronaldo scored a brace against Hungary in their opening game of Euro 2020 in Budapest on Tuesday (June 15) and in the process, the star striker moved beyond France's Michel Platini as the record goalscorer at the European Championship finals, taking his tally to 11 at the Puskas Area in Budapest on Tuesday.