Andrej Kramaric's last-gasp winner helped Hoffenheim to snatch a 2-1 comeback victory over wasteful Borussia Dortmund at the curtain raiser of the 17th round in Bundesliga. 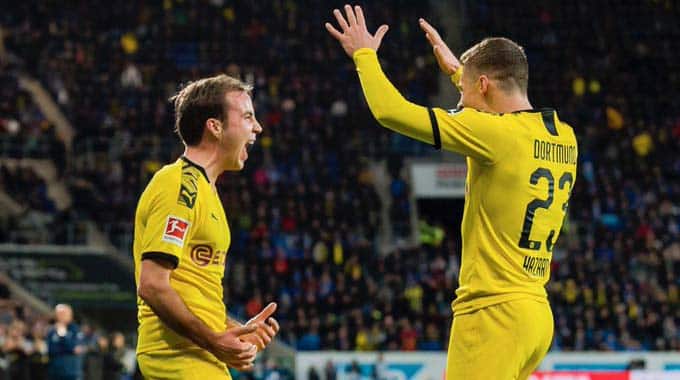 Berlin: Andrej Kramaric's last-gasp winner helped Hoffenheim to snatch a 2-1 comeback victory over wasteful Borussia Dortmund at the curtain raiser of the 17th round in Bundesliga.

The "BVB" were in complete control over most of the time on Friday but Hoffenheim staged a clinical comeback in the closing period and secured all three points on home soil, the Xinhua news agency reported.

Lucien Favre's men ensured a bright start on the road as the visitors made use of their second chance to break the deadlock after Mario Gotze tapped home Achraf Hakimi's square pass in the 17th minute.

Dortmund remained on the front foot and should have added another goal to their lead but for all that Jadon Sancho pulled wide from promising position with 20 minutes into the game.

Hoffenheim showed their first vital sign at the half hour mark through a dead ball as Robert Skov rattled the woodwork with a long-range free-kick.

The hosts had to thank their goalkeeper Oliver Baumann for denying the efforts from Hakimi and and Thorgan Hazard, whose shot was tipped to the crossbar with six minutes remaining in the first half.

After the restart, Dortmund continued where they left off and lacked inaccuracy as Julian Brandt was unable to overcome Baumann, five minutes into the second half.

As the game clock ticked, Dortmund retraced with their lead and ceased their offensive actions.

However, the hosts suddenly sparked to life and restored parity out of the blue in the 79th minute when deflected shot on target found joker Sargis Adamyan, who tapped home at the far post from sharp angle.

Things went from bad to worse for Dortmund as Hoffenheim turned the tides moments later when Adamyan's cross allowed Kramaric to nod home the winner from inside the box.

Dortmund pressed frenetically in the dying seconds of the match but their efforts remained fruitless as Hoffenheim protected their lead to the end.

With the result, Hoffenheim jump on the sixth position and Dortmund stay on the fourth place of the Bundesliga standings for the moment.

Everton's Duncan Ferguson to remain in charge for Arsenal clash