The draw leaves Leipzig with 51 points after 26 games, four points behind Munich and three behind Dortmund. 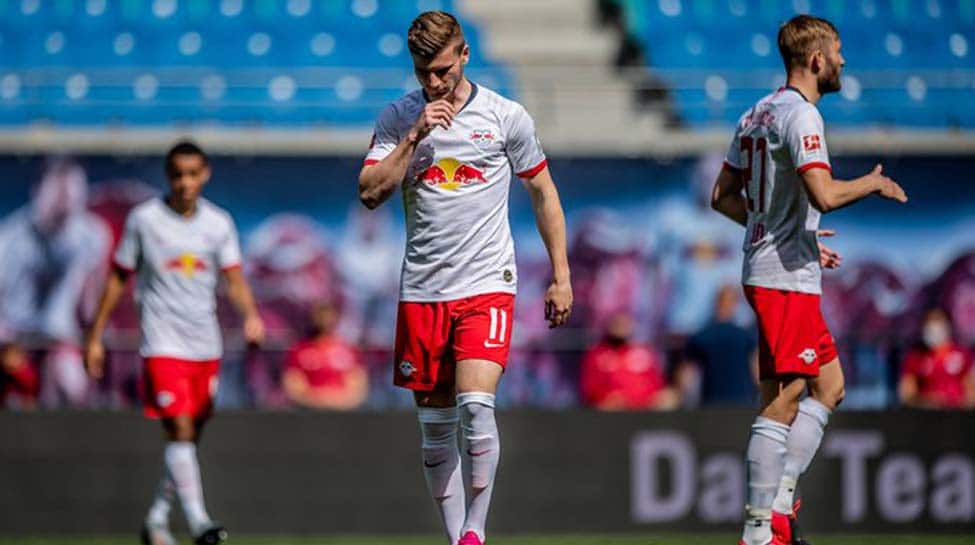 Bundesliga title hopefuls RB Leipzig needed the help of the video assistant referee (VAR) to grab a 1-1 draw at home to Freiburg when the German top-flight returned to action on Saturday after a two-month break due to the COVID-19 pandemic.

Leipzig wasted a slew of great chances after falling behind until captain Yussuf Poulsen rose to head them level in the 77th minute, with Freiburg having what looked to be a stoppage-time winner ruled out by VAR for offside.

Starting the day five points behind leaders Bayern Munich, Leipzig seemed to have lost none of their sharpness during the shut-down, with striker Timo Werner looking particularly dangerous in the first half.

However, Freiburg took the lead against the run of play in the 34th minute when Manuel Gulde got the last touch to guide home a corner, with the players celebrating his goal by bumping elbows rather than sharing high-fives and hugs.

That goal shook the home side and though they continued to enjoy plenty of possession, their previous composure disappeared.

They were not helped by the eerie atmosphere caused by a lack of fans in the stands with the substitutes spread out along the sidelines wearing face masks, rather than taking their normal place in the dugout.

Ten minutes into the second half, Leipzig substitute Ademola Lookman flashed a volley wide with the goal at his mercy, and that miss prompted a barrage of wasted chances from the hosts.

Poulsen`s towering header gave them a badly-needed confidence boost and they set about chasing a winner that would have kept them on the heels of leaders Bayern Munich, who play Union Berlin on Sunday, and second-placed Borussia Dortmund, who hammered Schalke 4-0 in the Ruhr derby.

Instead, they almost came unstuck in stoppage time as Robin Koch fired home Lucas Hoeler`s knockdown from a free kick, but Hoeler was judged to be offside and the goal was chalked off by the VAR.

"It`s good to have had the VAR, we had a bit of luck there to be honest. We need to discuss how we react to these set pieces, we need to defend better at the near post," Leipzig coach Julian Nagelsmann said.

"I am satisfied with the game, but not with the result. We went behind, in the second half we did well, a lot of pressure a lot of great chances."

The previous meeting between the teams earlier in the season produced a dramatic late winner for Freiburg, and their coach Christian Streich said he was disappointed that there was no-one in the stadium to witness another enthralling game.

"I am sad that the fans cannot watch the game and meet up on weekend and play this game together. This not something that is for ever," Streich said.

The draw leaves Leipzig with 51 points after 26 games, four points behind Munich and three behind Dortmund, while Freiburg climb to seventh in the table on 37 points, ahead of Schalke on goal difference.