Hazard`s contract with Chelsea runs until 2020 and the defending English Premier League champions are keen for the 27-year-old to extend his stay amid persistent media reports of a possible move to Spain. 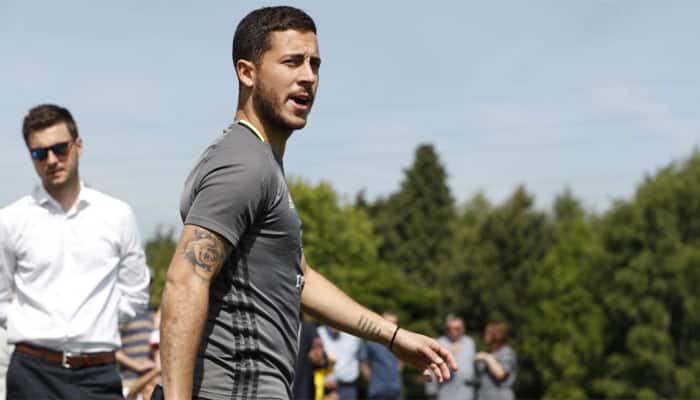 London: Chelsea midfielder Eden Hazard is in no hurry to discuss his future at the London club and the Belgian international believes that talks to extend his current deal would progress only after this summer`s World Cup.

Hazard`s contract with Chelsea runs until 2020 and the defending English Premier League champions are keen for the 27-year-old to extend his stay amid persistent media reports of a possible move to Spain.

Speaking ahead of Belgium`s international friendly against Saudi Arabia on Tuesday, Hazard said that finishing the season and playing in the World Cup finals were higher on his list of priorities. "Look, I`m going to finish the season first, then play the World Cup and then I`ll leave on holiday ... we`ll see what happens next," Hazard said. "I haven`t thought about it yet. I have another two years` contract with Chelsea. I am very happy. I just think about the end of the season and the World Cup."

Chelsea manager Antonio Conte has been criticised recently for his negative approach to their 1-0 league defeat by Manchester City this month, in which Hazard cut a frustrated figure operating in the unfamiliar role of a deep-lying striker.

However, Hazard said he was fully committed to helping fifth-placed Chelsea to secure a top-four finish and a Champions League spot for next season. "I just want to be on the pitch," Hazard added. "Number nine or number 10. I can play left back if the manager wants me to, no problem."

UEFA to allow players to switch clubs in Champions League