Since two out of the three MLAs have merged the legislative wing, they are saved from inviting anti-defection law, which makes it mandatory that two-thirds of the strength should agree for merger. 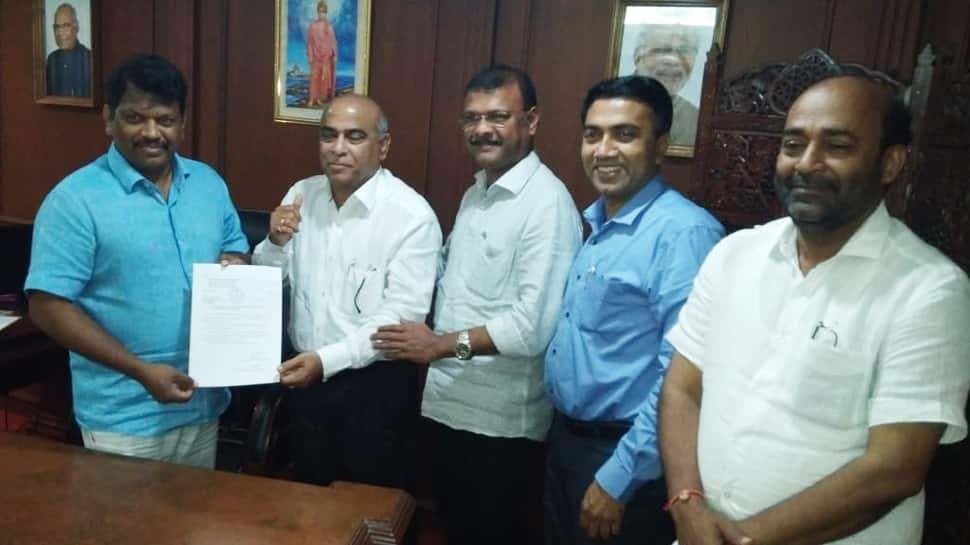 PANAJI: In a late night development in Goa, two of the three MLAs of the Maharashtrawadi Gomantak Party (MGP) merged their party's legislative wing with the Bharatiya Janata Party (BJP). The mid-night political drama has increased the strength of the BJP from 12 to 14 in the 36-member House, bringing them at par with opposition Congress which has an equal number of MLAs on the floor.

In a letter signed by Manohar Ajgaonkar and Dipak Pawaskar, the two legislators said that they have merged the MGP legislature party with the BJP. However, the third Maharashtrawadi Gomantak Party (MGP) MLA Sudin Dhavalikar, who is the Deputy CM in the BJP-led Goa government, has not signed the letter. Goa Assembly Speaker Michael Lobo was sent the letter at 1:45 am.

Confirming the development, the Speaker said that his office was contacted by the two MLAs around 1:30 am when they walked in with a letter of merger, which was officially accepted. "MGP's legislative wing has split. Two-third of MGP legislators formed a separate group and they are merging it with the BJP. All formalities as per the Constitution of India have been completed," Lobo said.

While Ajgaonkar is tourism minister, Dhavalikar is a deputy chief minister in the BJP-led state government in Goa. 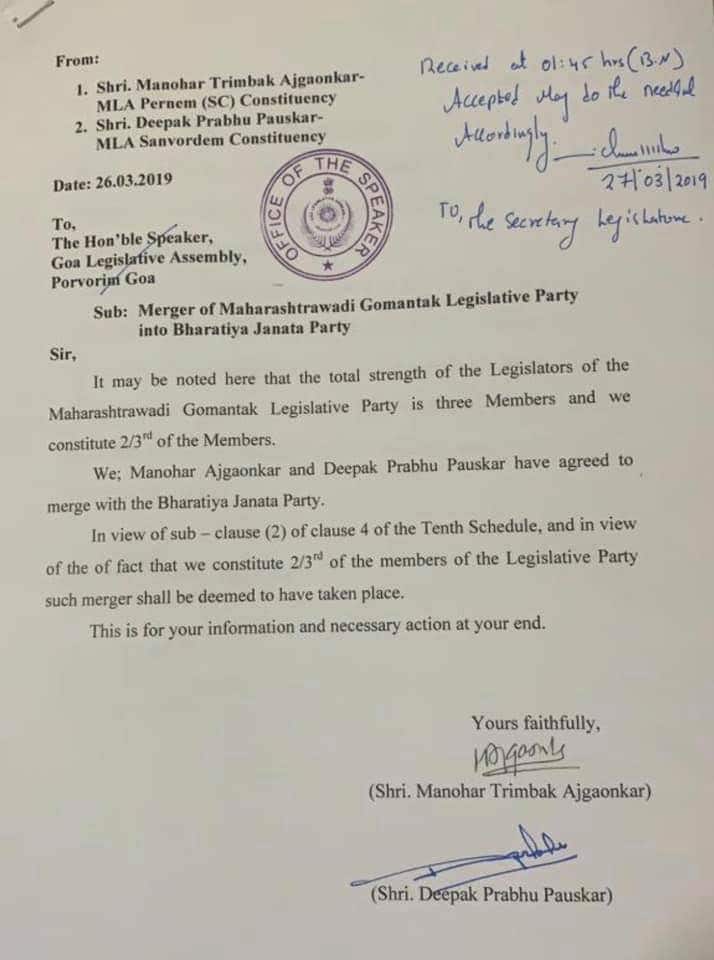 Soon after merging with the BJP, Ajgaonkar hailed Prime Minister Narendra Modi's leadership. "The next government will be formed by BJP because wherever he (PM Modi) goes, people say Modi, Modi. Because of Modi, BJP has developed in Goa," he said. He added that he took the decision to merge with the BJP as he was unsure of what would happen to him in the MGP. "As a Dalit, I was unsure of my existence in MGP. Bahujan Samaj leaders like Lavu Mamledar were sacked from MGP," he said.

Another MLA Pauskar also said that he was hopeful of getting a ministry in the Cabinet. "We have happily joined BJP. Oath-taking ceremony will take place at 12 PM (today) in the presence of Goa Governor. We will accept whatever ministry will be given to us by Goa CM," he said.

Since two out of the three MLAs have merged the legislative wing, they are saved from inviting anti-defection law, which makes it mandatory that two-thirds of the strength should agree for merger. The legislators broke away from the MGP and formed a group, MGP (two) on Tuesday.

Speaking on the merger, Goa CM Pramod Sawant said: "Two MGP MLAs Manohar Ajgaonkar and Deepak Pauskar have joined BJP for the stability of the government. Automatically, our strength has grown to 14."

The Congress though slammed the BJP for the merger asserting that any party joining hands with the saffron party facing threat to its existence. "The BJP has proved it is a threat to all its allies, this is a clear indication to all NDA partners all over the country just before Lok Sabha elections that any partnership with BJP will be detrimental to the existence of their own party," Goa Pradesh Congress Committee Chief Spokesperson Sunil Kawthankar said.