This has come to the fore after observing the raising prevalence of this practice where the number of people consuming food at office desk is on a high. 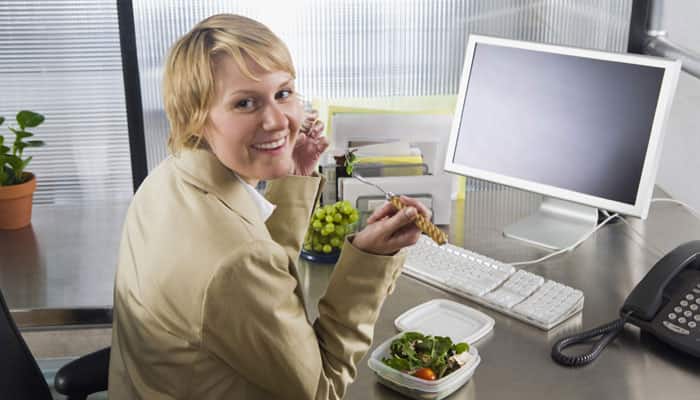 New Delhi: A new study says that consuming food at desk during office hours can hamper a worker's productivity.

This has come to the fore after observing the raising prevalence of this practice where the number of people consuming food at office desk is on a high.

The practice has now become so prevalent that two thirds of people eat lunch at their desks most days of the week, reports Daily Mail.And food with pungent smell like oily fish, cheese and egg sandwiches are having an adverse effect on working conditions and office culture.

In a survey of 1,000 office goers, two out of five said they were too occupied to go out for a lunch break, while over half maintained that those, who ate at their desks were `anti-social`.

The worst smell was said to be mackerel or sardines, followed by cheese and eggs - yet fewer than one in five workers ask a colleague to eat somewhere else.Buttered toast topped the list of the best-smelling food, followed by fresh pastries and a bacon sandwich.

Gareth Cowmeadow, the lead researcher said, "Some people may not realise how much of an effect their lunch choices could have on co-workers who sit near them.

"But desktop dining may not only be bad workplace etiquette - it could also have a detrimental effect on waistlines.Experts have warned that the growing culture of eating in the office could lead to weight gain, with health psychologists saying it distracts people into `forgetting` they`ve eaten.

Also, in an earlier research, experts have warned that not taking time out to eat a proper meal, and being distracted sitting in front of a computer, could mean people remain hungry and want to eat again later.

Lead author Professor Jane Ogden said: "Al desko diners run the risk of increasing their food intake later in the day which can lead to weight gain and obesity"Eating at one`s desk is also highly unhygienic - with computer keyboards and worktop surfaces being riddled with millions of bacteria.

In another research, experts found that the average office worker comes into contact with 10 million bacteria a day.

"We know from studies 3,000 organisms per square inch can be found on a keyboard or over 1,600 a computer mouse", she said.

"Over the course of a day you might be picking up those bacteria and then if you suddenly decide to have lunch at your desk without washing your hands first, you`re basically transferring those bacteria into your mouth."

First c-section birth may have taken place in 1337