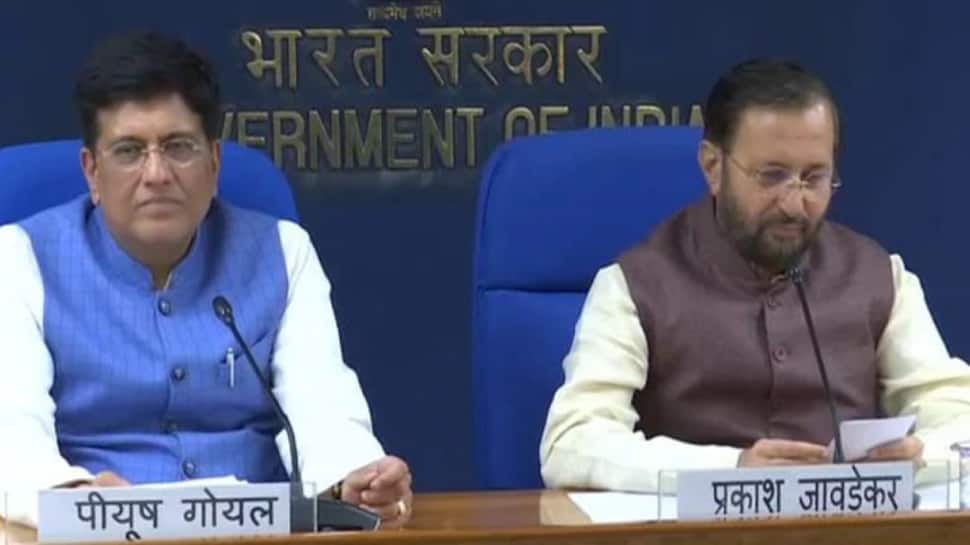 NEW DELHI: The Union Cabinet on Wednesday announced a slew of decisions, including further easing of norms of foreign direct investment (FDI) in four different sectors, to boost the economic growth.

Talking to media after the meeting of Union Cabinet, Commerce Minister Piyush Goyal said, "There is a little slowing down of FDI worldwide so we have taken some significant decisions. 100 percent FDI for coal mining and all related processing activities will be allowed under automatic route."

Here are all the important decisions taken by Union Cabinet on Wednesday:

Commerce Minister Piyush Goyal the Union Cabinet has approved 100% FDI under automatic route in coal mining and associated infrastructure. Goyal said that the move will attract foreign investors towards India and will increase competition in this sector. As per the present FDI policy, 100% FDI under automatic route is allowed for coal & lignite mining for captive consumption by power projects, iron & steel and cement units and other eligible activities permitted under and subject to applicable laws and regulations.

The Union Cabinet has approved 100% foreign direct investment (FDI) in contract manufacturing and the government has also eased sourcing norms for single-brand retailers. Talking to media after the meeting of the Union Cabinet, Commerce Minister Piyush Goyal said, "The changes in FDI policy will result in making India a more attractive FDI destination, leading to benefits of increased investments, employment, and growth." Goyal added that in single-brand retail trading (SBRT), the definition of 30% local sourcing norm has been relaxed and the government has now decided to permit online sales without prior opening of brick and mortar stores.

The Union Cabinet has approved 26% foreign direct investment (FDI) in digital media sector with government approval.  It is to be noted that 26% FDI is already allowed in print media sector and 49% FDI is permitted in broadcasting content services, both through the government approval route.  The extant FDI policy currently allows 49% FDI under approval route in Up-linking of 'News &Current Affairs' TV Channels. Now the Cabinet has decided to permit 26% FDI under government route for uploading/ streaming of News & Current Affairs through Digital Media, on the lines of print media.

The government on Wednesday also announced a Rs 6,268 crore subsidy for export of 6 million tonnes of sugar during this fiscal year. Union Minister Prakash Javadekar said that the a lump sum export subsidy of Rs 10,448 per tonne will be given to sugar mills in the 2019-20 marketing year (October-September). He added that the move is going to benefit lakhs of farmers in different parts of the country.

Union Minister Prakash Javadekar on Wednesday announced that the Cabinet has approved the establishment of an International Coalition for Disaster Resilient Infrastructure (CDRI). Javadekar added that the CDRI will be launched by Prime Minister Modi during UN Climate Summit in New York on September 23, 2019. The proposal to set up CDRI was approved by the Prime Minister on August 13, 2019.