These 400 members are from 700 Tablighi Jamaat members whose passports and other documents have been seized by the crime branch. 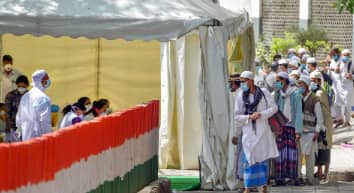 New Delhi: In investigation against Tablighi Jamaat congregation at Nizamuddin Markaz, Crime Branch of Delhi Police has so far questioned about 400 foreign members of Jamaat, who came from different countries to participate in the religious gathering in the national capital, sources told Zee Media.

All these 400 Jamaat members were questioned by the Crime Branch sleuths by visiting their bases in Delhi and at quarantine centers. These 400 members are from 700 Tablighi Jamaat members whose passports and other documents have been seized by the crime branch.

The remaining Jammat members will be questioned soon, said the sources.

In a related development, Delhi Police today opposed a plea in the Delhi High Court seeking a direction that investigation in the case against Tablighi Jamaat leader Maulana Saad should be handed over to National Investigation Agency (NIA).

Maulana Saad is alleged to have held a religious congregation in violation of the orders aimed at containing the spread of coronavirus COVID-19 pandemic.

While conducting the hearing through video conferencing, a bench of Justices Siddharth Mridul and Anup Jairam Bhambhani asked the petitioner to place the judgments in support of his plea to transfer the investigation from Delhi Police Crime Branch to NIA.

The petition, filed by Mumbai-based lawyer Ghanshyam Upadhyay, has also sought a direction to the NIA to investigate the matter in a time-bound manner and the probe be monitored by the high court.

The petitioner alleged that the Delhi Police has failed to arrest the leader despite the lapse of considerable time.

Delhi government standing counsel (criminal) Rahul Mehra and advocate Chaitanya Gosain opposed the plea saying Delhi Police was conducting the investigation in a fair manner and argued that the petitioner has no locus standi to file the plea.

Meanwhile, the court has listed the matter for further hearing on May 28.

Earlier on March 31, the Delhi Police's crime branch had lodged an FIR against seven persons, including Maulana Saad, on a complaint by Station House Officer of Nizamuddin police station.

The Enforcement Directorate (ED) also filed a money laundering case against Saad, trusts links to the Jamaat and others.