Aam Aadmi Party's UP in-charge and Rajya Sabha MP Sanjay Singh addressed a press conference on Thursday and alleged that there was corruption in the purchase of land for Ram Temple. 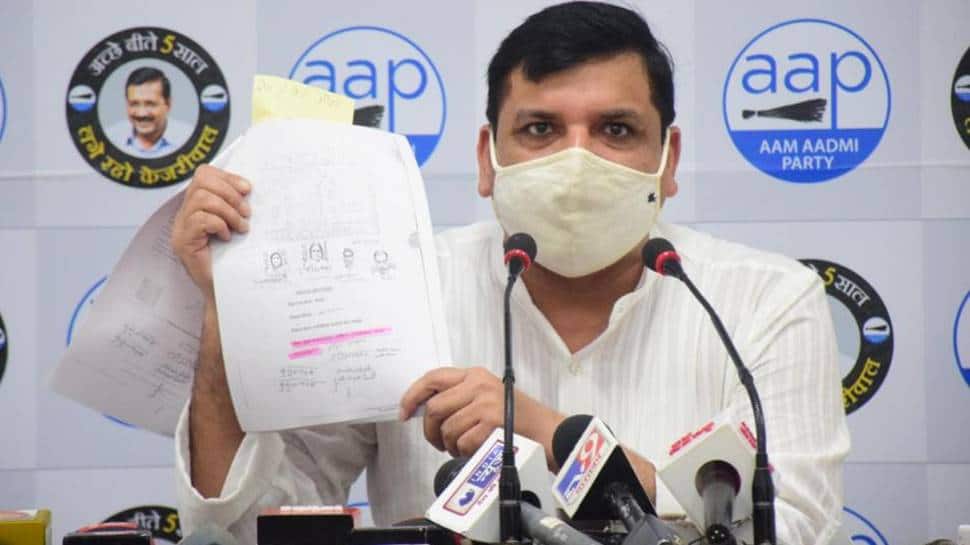 Ravi Mohan Tiwari's name was put in the agreement so that crores of rupees could be wasted by putting money in his account. Bharatiya Janata Party Mayor Rishikesh Upadhyay bought land worth Rs 1.90 crore from Mahendra Nath Mishra in the name of nephew Deep Narayan Upadhyay on June 7, its sources of income should be investigated. The accounts of Sultan Ansari and Ravi Mohan Tiwari should be investigated.

If 17 crores went to their account, where did they go? In Uttar Pradesh, if any purchase of more than Rs 50 lakh is done in the registry department, information is given to the Income Tax Department, in such a situation why was the information not given in this case of purchase of land worth 18.50 crores, 8 crores and 2 crores. The temple of Lord Shri Ram is not being built because scam and corruption is being done, the people of BJP and Ram Janmabhoomi Trust have eaten the money of Prabhu Shri Ram Mandir.

Rajya Sabha MP Sanjay Singh exposed a series of lies, “Lie number 1: on the first day, Champat Rai said that I will study the matter while he was meeting Sultan Ansari for 3 months and was doing land deal. He knew about the incident. Lie No 2 was an old agreement with Sultan Ansari and Ravi Mohan Tiwari, that was binding on us. So he bought land for 2 crores which we bought from him for 18.50 crores. The truth is that that agreement was canceled on 18 March itself. Lie number 3: the land rate has become expensive. People of BJP, Vishwa Hindu Parishad, Ram Janmabhoomi Trust were asking me to find out the rate of the surrounding land. Whereas the money thieves knew that the rate of the adjacent land was Rs 8 crore.”

Rajya Sabha MP Sanjay Singh said that the faith of crores of Ram devotees of the country is being played with. He added, “There has been scam and corruption in the temple of Lord Shri Ram. If the temple of Lord Shri Ram is not being built, it is because scam and corruption is being done in the name of Ram Mandir. The leaders of the Bharatiya Janata Party and the people of Ram Janmabhoomi Trust together have eaten the money of the temple of Lord Shri Ram. BJP leaders should apologize to crores of Hindus of the country and the world. This Rs 16.50 crore should be withdrawn from these dishonest people because crores of people of this country have hard earned money and these dishonest people should be caught and put in jail. These are big thieves and today's documents make it clear that not one lie was told again and again. He said that Champat Rai knew that the value of the adjoining land was 8 crores. I want to ask Champat Rai that if you had to buy land with your own money, had you bought the land next to it for Rs 18.50 crore? Because crores of people of the country had put their faith and hard earned money into this. You had to do corruption with that money. So, right next door, 10370 square meter is bought for 8 crores and 12080 square meter is bought for 18.50 crores. This has completely exposed the corruption.”

Shri Singh further added, “Let me tell you where has this money gone and where has this money been wasted. Bharatiya Janata Party Mayor Hrishikesh Upadhyay and Ravi Mohan Tiwari are relatives. He is the brother-in-law of his family. I am telling what the Mayor of the Bharatiya Janata Party, Hrishikesh Upadhyay did. On June 7, he bought land worth Rs 1.90 crore in the name of his nephew. Whose source of income is not known. His nephew's name is Deep Narayan Upadhyay who lives with Bharatiya Janata Party Mayor Rishikesh Upadhyay. He bought this land on 7th June. The land was bought from a person named Mahendra Nath Mishra for Rs 1.90 crore. Its sources of income should be investigated. How did this 1.90 crore rupees come to him? There should be an investigation into the accounts of Sultan Ansari and Ravi Mohan Tiwari that the 17 crores that went to their accounts, where did they go. All these points should be checked.”

While further exposing the crime, “BJP Mayor Hrishikesh Upadhyay's nephew buys land for 1.90 crores. The witness in it is Ravi Mohan Tiwari. Out of the corruption done by looting the donations of Lord Shri Ram's temple, work has been done to make private land property worth 1.90 crores. The date of 18th March 2021 will be entered in black letters, as the old agreement of Kusum Pathak and Harish Pathak with 9 persons on 18th March 2021 was nullified. When the land became free, the Ram Janmabhoomi Trust could buy it directly from them for two crores, but did not buy it. Ram Janmabhoomi Trust bought him for Rs 18.50 crore on 18 March itself. This land was bought on March 18 with the intention of corrupting Ravi Mohan Tiwari and Sultan Ansari and on March 18 itself, Gata No. 242 was bought for Rs.8 crore. 10,000 square meters of land was bought. The witnesses in this too are Anil Kumar Mishra and Hrishikesh Upadhyay. Champat Rai knows that the cost of the adjacent land is Rs 8 crore, so why remain silent till now. Why did they lie and why did they not come forward and tell by themselves that we have bought 10370 square meters of land adjacent to it for 8 crores and another 12 thousand square meters for Rs 18.50 crores?”

Rajya Sabha MP Sanjay Singh said that the people of Ram Janmabhoomi Trust are misleading the people of the country by writing absolutely nonsensical letters. He said, “It is written in that letter that the sellers of the said land had made an agreement in the past. Why are you writing this false letter, why are you misleading Ram devotees. The temple of Lord Shri Ram should be built fast but these donation thieves should be sent to jail. The poor cut their stomach and donated for the temple of Lord Shri Ram Mandir. Every rupee of that donation should be put to good use. Crores of Hindus of this country should be given an apology by the Bharatiya Janata Party, Vishwa Hindu Parishad and Ram Janmabhoomi Trust for this theft. Arrest them all, put them in jail and confiscate their accounts.”

Shri Singh lastly added, “My family members are being threatened, I am being attacked. I want to tell crores of Ram devotees not to be misguided. Their reality has now come to the fore. The BJP blames the Aam Aadmi Party with no substantial proofs. The statement of Jagadguru Shankaracharya ji, Swami Swaroopanand ji, the chief priest of Ramlala Mandir came, Satyendra Das, Swami Avmukteshwaranand's statement came that they too were hurt by this incident of corruption. He gave a complaint in writing. The statement of Nirmohi Akhara came that three years ago they were accused of corruption of Rs 1400 crore, are all these also against Lord Shri Ram? The donation thieves must stop blaming others to save their own theft. They must return this Rs 16.50 crore and go to jail.”