They instead asked her to visit the Nil Ratan Sircar (NRS) Medical College and Hospital for an open discussion to resolve the impasse. 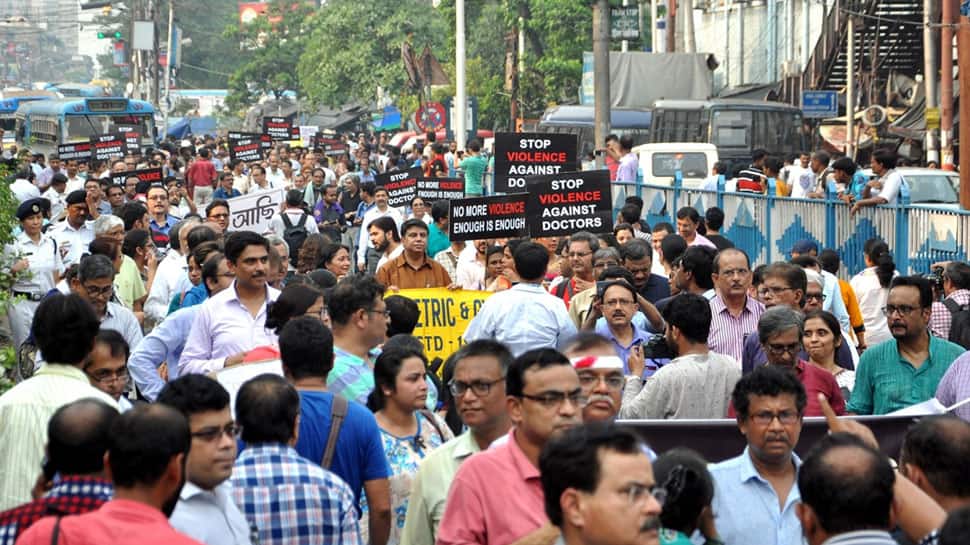 The agitating doctors on Saturday refused to hold a closed-door meeting with West Bengal Chief Minister Mamata Banerjee at the state secretariat, saying that they feel highly insecure and apprehensive regarding their representatives' "meeting with her behind closed doors".

They instead asked her to visit the Nil Ratan Sircar (NRS) Medical College and Hospital for an open discussion to resolve the impasse. The doctors said no representative of the agitating doctors would be attending the meeting called by Banerjee at the state secretariat on Saturday evening.

"We feel highly insecure and apprehensive regarding our representatives' meeting with the chief minister behind closed doors. That is why we are not sending any representatives to the Chief Minister's Office to attend the meeting," read a letter of the joint forum of junior doctors after holding a governing body meeting.

Two doctors were allegedly assaulted by relatives of a patient who had died on Monday night at the NRS hospital.

"Right from the beginning, we are open to a healthy discussion to find a solution to meet our demands. We want to make this very clear that we are deeply concerned about the sufferings of common people. We want an urgent solution to this situation by ensuring proper security and safety at our workplace as per our demands. We shall resume our duties as soon as our demands are met," read the letter. "We humbly request the chief minister to meet all of us at the NRSMCH to discuss and implement all our demands at the earliest," also read the letter.

On Friday night, the agitating junior doctors declined to attend a meeting called by CM Banerjee at the state secretariat, Nabanna, saying it was a ploy to break their stir. After the protesting doctors did not turn up, Banerjee gave them time again at 5 pm on Saturday.

Meanwhile, resignation by senior doctors continued in support of their protesting colleagues. Over 300 medicos across various state-run medical college and hospitals have resigned from their services.