Thousands of protestors including children, women and the elderly gathered near the Madras High Court metro station in what they call a ‘Jail Bharo’ protest. 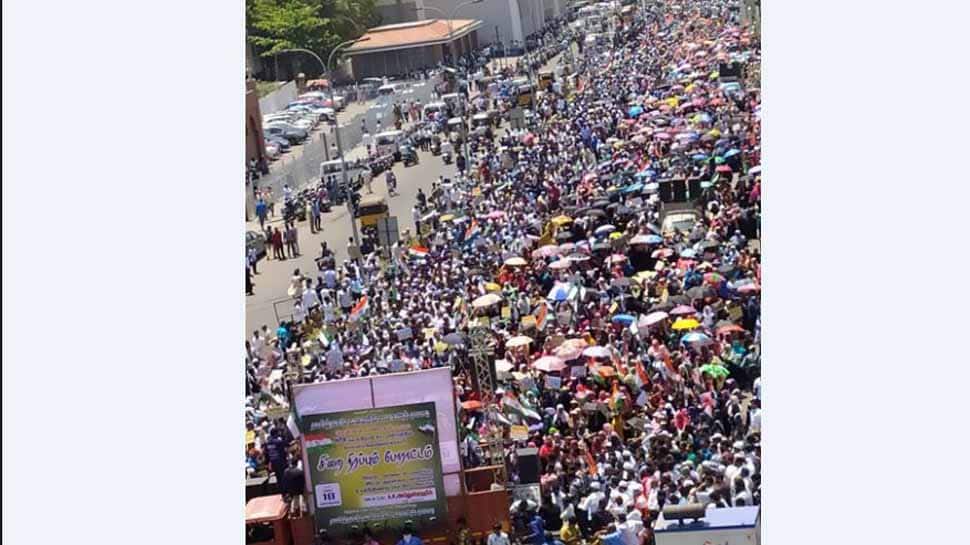 At a time when malls, cinema halls, gyms, educational institutions, and public parks are shut down in Chennai and other parts of Tamil Nadu, a Non-political Islamic organization Tamil Nadu Thowheed Jamath (TNTJ) is staging a protest in Chennai demanding the Citizenship Amendment Act (CAA) be revoked and that the state Assembly pass a resolution against National Population Register 9NPR).

Thousands of protestors including children, women and the elderly gathered near the Madras High Court metro station in what they call a ‘Jail Bharo’ protest.

The protestors of TNTJ were heard shouting slogans such as, “even corona has killed only 2 people, but CAA has killed over 80” and “we would rather die of corona than as refugees in our own country”. The organizers maintain that the protest is being conducted despite the partial shutdown over corona virus fears, as it was a pre-planned event.

The Tamil Nadu government had issued an order on Monday, March 16th regarding the closure of various establishments until March 31st. The order mentioned that planned events could take place, but with less crowds. iut had also denied permission for rallies, public meetings, summer camps, conferences until March 31st. People have also been advised not to crowd in large numbers at placed of worship and avoid travel to other states until the month-end.

The protest is occurring a day after the protest at Washermanpet, dubbed as Chennai’s Shaheen Bagh had been called off. Protestors had gathered at the Washermanpet locality in North Chennai in February and had been protesting for over 33 days demanding an assembly resolution.

The organizers of the protest at Washermanpet said they would resume the agitation until the government passes a resolution against CAA-NRC-NPR, but they would be temporarily calling it off due to Covid-19 fears.

The AIADMK government in Tamil Nadu, which is an ally of the BJP has maintained that the CAA would do no harm to Indian citizens. However, the Tamil Nadu government has put the NPR on hold stating that they are yet to receive certain clarifications that were sought from the Central government.