Prime Minister Narendra Modi on Friday paid tribute to the 20 Indian soldiers who laid their lives during the Galwan Valley clashes on the midnight of June 15-16 and said that their bravery gave a strong message to the whole world. 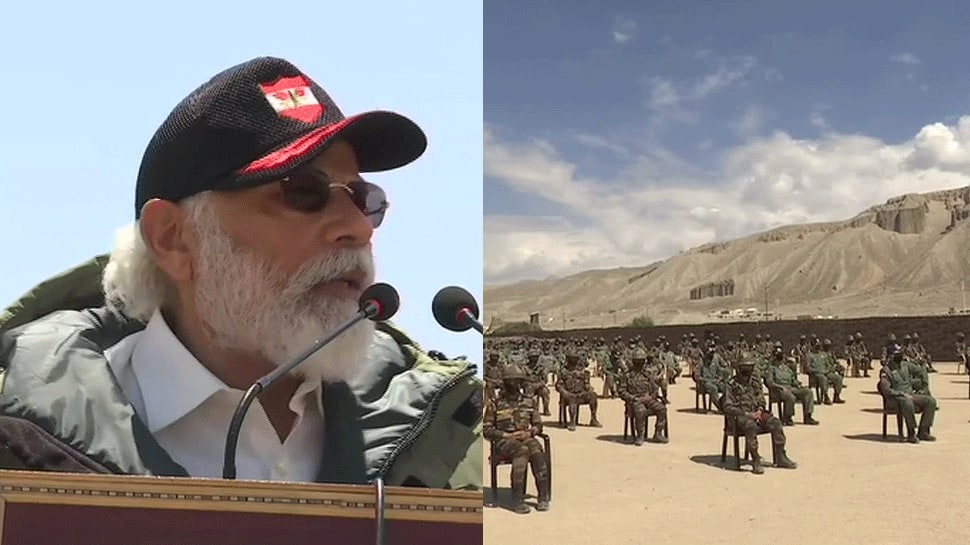 LADAKH: Prime Minister Narendra Modi on Friday (July 3, 2020) warned China saying the ''age of expansionism is over'' as he heaped praise on the Indian soldiers for their indomitable bravery in the Galwan Valley clashes in eastern Ladakh recently.

''Age of expansionism is over, this is the age of development. History is witness that expansionist forces have either lost or were forced to turn back,'' the PM said in a strong warning to China. Coming down heavily on China for not respecting India peace overtures, the PM said, "Those who are weak can never initiate peace, bravery is a pre-requisite for peace."

PM Modi also paid tributes to the 20 Indian soldiers who laid their lives during the Galwan Valley clashes on the midnight of June 15-16 and said that their bravery gave a strong message to the whole world.

“The bravery that you and your compatriots showed, a message has gone to the world about India’s strength. I once again pay my tributes to the brave soldiers martyred in the Galwan Valley clashes,” PM Modi said while addressing the soldiers in Nimmoo, Ladakh.

Praising the valour of the Indian armed forces, the Prime Minister said, “The bravery of 14 Corps will be talked about everywhere. Tales of your bravery and valour are echoing in every house in the country.” He stated that the enemies of 'Bharat Mata' have seen your fire and fury.

Through his speech, the PM reminded, "Be it World Wars or peace, whenever the need arises, the world has seen the victory of our braves and their efforts towards peace. We have worked for the betterment of humanity."

Assuring the Indian soldiers that the entire country is with them, the PM said, ''We have increased expenditure on development on infrastructure in the border area by three times.''  "I am looking at women soldiers in front of me. In the battlefield at the border, this view is inspiring...Today I speak of your glory," PM Modi said.

PM Modi's Leh visit has apparently irked China, which said that 'no side should escalate the situation'.  "India and China are in communication and negotiations on lowering the temperatures through military and diplomatic channels. No party should engage in any action that may escalate the situation at this point," news agency ANI quoted Zhao Lijian, Chinese Foreign Ministry spokesperson as saying.

PM Modi Modi arrived in Leh and Ladakh on Friday morning to review the situation 18 days after a violent faceoff in the Galwan Valley in eastern Ladakh with the Chinese forces, in which 20 Indian soldiers lost their lives.

Located at 11,000 feet, this is among the tough terrains, surrounded by Zanskar range and on the banks of the Indus. Sources had earlier informed about CDS Rawat`s visit to Leh today. All eyes were on General Rawat`s visit since it came in the wake of Defence Minister Rajnath Singh`s visit to Ladakh being rescheduled.

The Defence Minister was earlier scheduled to visit Ladakh today to review the preparedness of the army amid the ongoing standoff with China. The situation at the India-China border remains tense after 20 Indian soldiers lost their lives in a violent face-off in the Galwan valley on June 15-16 when Chinese troops attempted to unilaterally change the status quo during the de-escalation.

India and China have been involved in talks to ease the ongoing border tensions since last month.

The Chinese side has not yet revealed the number of casualties on its side. It was the first casualties faced by the Indian Army in a clash with the Chinese People`s Liberation Army since 1975 when an Indian patrol was ambushed by Chinese troops in Arunachal Pradesh.