The 11-hour-long protest ended after getting assurance from top brass to redress their grievances. Delhi Police has filed a review petition in the Delhi High Court which will be heard tomorrow at 3 pm. The petition has been filed in the HC as the Delhi police cannot fulfil the demands of agitating cops on its own. 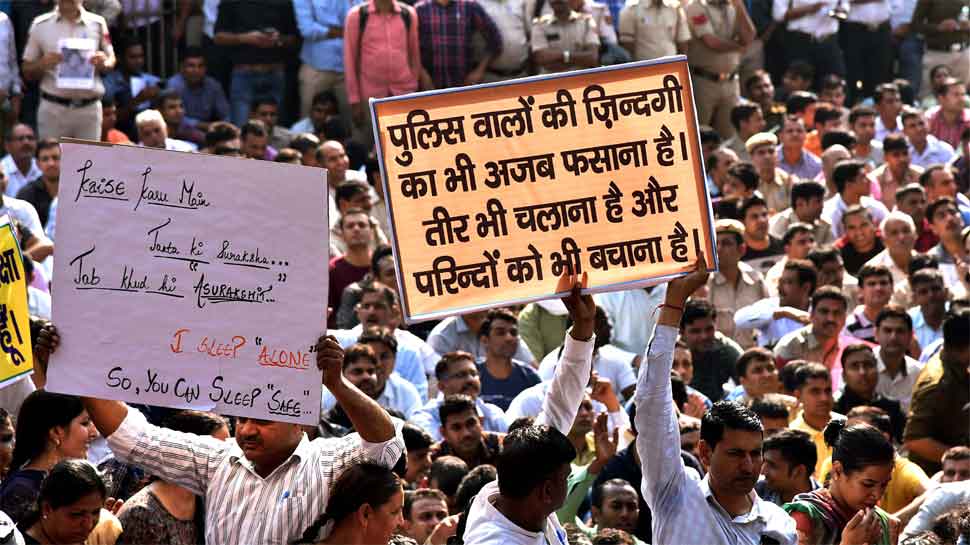 New Delhi: The Delhi Police personnel on Tuesday evening ended a nearly 11-hour-long protest after getting assurance from senior officers to redress their grievances. Thousands of cops laid siege outside the Police Headquarters since morning today, following the two attacks on their colleagues, one on Monday and another on Saturday, after a parking row between an on-duty policeman and a lawyer at Tis Hazari Court.

The Delhi Police has also filed a review petition in the Delhi High Court which will be heard tomorrow at 3 pm. The petition has been filed in the HC as the Delhi police cannot fulfil the demands of agitating cops on its own.

Delhi Commissioner of Police, Amulya Patnaik was quoted as saying by ANI, ''The protest (by police today) was a peaceful one, what happened today has happened. We will request the force to maintain high standards of discipline in future.''  Patnaik's late-night statement said, ''The concerns of police personnel have been taken up at appropriate levels. A case has been registered and action will be taken in Saket incident. Delhi High Court has ordered judicial inquiry in Tis Hazari Court incident.''

Earlier in the day, Amulya Patnaik had urged the cops to maintain peace, saying “Appeal to you to maintain peace. Have full faith that we will handle this situation properly. The government and people put enormous faith in us, as we are the keepers of the law.”

Addressing the police personnel protesting cops, Special Commissioner of Delhi Police Satish Golcha also appealed them to stay calm and return to their duty. He told them that “All the policemen who were injured in the Tis Hazari clash will be given a compensation of at least Rs 25,000 by Delhi Police.”

Devesh Shrivastava, Joint Commissioner of Police (South), had also urged the protesters to end the protest, saying that the policemen who have been injured are being treated, and no departmental action will be taken against the protesting cops. Shrivastava said, “All your demands will be accepted. FIRs have also been registered in connection with Saket and Tis Hazari Court incidents. No departmental action will be taken against those who are protesting.”

The agitating policemen were also persuaded by Rajesh Khurana, Joint Commissioner of Police (Central) to continue with their work. ANI quoted him as saying “We are the ones who enforce the law and we have to continue with our work. We spend double the time in the field, at police stations, doing our duty than what we spend with our families. There is no festival that we celebrate with our families, at our home.”

Earlier in the day, Deputy Commissioner of Police, New Delhi, Eish Singhal, told the protesting policemen that “Your concerns and anger have been conveyed to senior officials and I want to assure you that your protest here will not go unsuccessful.”

The protesting personnel were demanding that the licences of lawyers who assaulted their colleagues should be revoked and the transfer of the officers involved in the Tis Hazari clash last week rescinded.

Lt. Governor Anil Baijal reviewed the situation in light of the recent incidents of clashes between lawyers and Policemen and promised the best possible treatment for injured advocates and police personnel. He said, "Suitable ex-gratia compensation to be given to the injured officers of Delhi Police as well."

He appealed to all the concerned to maintain harmony and law and order, as he was briefed about the current situation by Special CP (Intelligence) and the orders of Delhi High Court in the matter. Special CP also apprised that a clarificatory application is already being filed in the matter.

Baijal also directed the Delhi's Chief Secretary to ensure that best possible medical treatment is provided to the injured advocates as per the Delhi High Court order. He also directed the Commissioner of Police to ensure that the police officers injured are also provided best medical treatment free of cost and advised that senior officers should visit the injured policemen to boost their morale and comfort their families.

The IPS Association also took to Twitter and condemned the incident involving the alleged assaults on policemen. The Association tweeted "Incident involving police & lawyers unfortunate. All should take a balanced view of it based on facts in the public domain. Countrywide, police stand in solidarity with those police personnel subjected to physical assault & humiliation. Condemn all attempts to break the law, by anyone!"

Following the clashes between lawyers and the police at Tis Hazari Courts, the Bar Council of India asked various bar bodies to identify lawyers "indulging in hooliganism" and requested advocates to end their protests, as it was "bringing a bad name to the institution".

BCI Chairman Manan Kumar Mishra said in a letter said, "The incidents of beating policemen on bike by some of Saket lawyers, assault of an auto driver, manhandling general public are most unfortunate and Bar Council of India is not going to tolerate it. These are acts of grave misconduct."

Lawyers at the six district courts in the capital - Tis Hazari, Karkardooma, Saket, Dwarka, Rohini and Patiala House -- boycotted work throughout Monday. Lawyers in Lucknow also abstained from judicial work in the high court as well as subordinate courts, in protest against the alleged police atrocity against their colleagues at Delhi's Tis Hazari court.
Several lawyers from Kanpur to Coimbatore protested against the Delhi Police, ANI reported. Kanpur lawyers vandalised police van and various vehicles were set to fire during the fight.

What the Central govt said

The Union Home Ministry received a report from the Delhi Police on Saturday's clash at the Tis Hazari Court complex. A top Home Ministry official said on Tuesday, "We are closely monitoring the situation in Delhi. A judicial inquiry has been ordered. Let us wait for the outcome of the inquiry."