The missile was test-fired from a Sukhoi Su-30MKI combat aircraft of the Indian Air Force that took off from an airbase in West Bengal. The Astra missiles are equipped with mid-course inertial guidance and terminal active radar homing. They are capable of targeting the enemy aircraft or missiles at short-range (20 km) as well as at BVR (over 70 km). 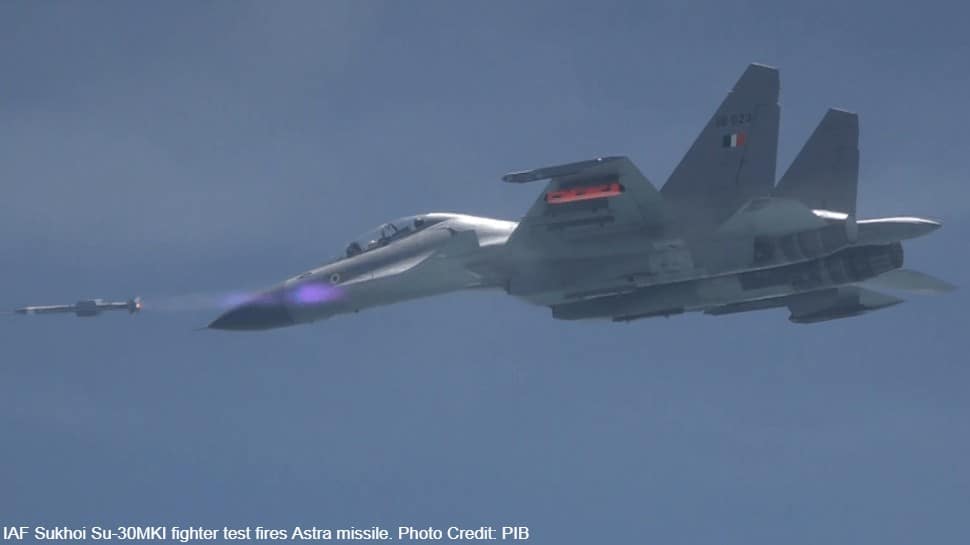 An Indian Air Force (IAF) Sukhoi Su-30MKI fighter Tuesday successfully test-fired the indigenous Beyond Visual Range Air-to-Air Astra missile with a range of over 70 kilometers off Odisha coast as part of user trials. The Astra missile, which can fly towards its target at a speed of over 5,555 kilometres per hour (4.5 Mach) with a 15 kilogramme high-explosive pre-fragmented warhead, was test-fired under the guidance of Defence Research and Development Organisation (DRDO) from the Su-30MKI combat aircraft that took off from an airbase in West Bengal.

The indigenously-developed Beyond Visual Range Air-to-Air Missile (BVRAAM) Astra missile has been developed by DRDO and integrated on Su-30MKI and other air platforms, a previous statement from the research organisation said. Modfications of the Su-30MKI jets to accommodate Astra missiles has been carried out by Hindustan Aeronautics Limited (HAL). More than 50 private and public sector industries have been involved in the development and production of Astra missile.

In October 2018, the IAF had successfully test-fired the solid propellant Astra missile several times over a period of a week to judge its capability in the engagement of pilotless target in different modes of manoeuvring, off-boresight, medium and long ranges. The Astra missiles are equipped with mid-course inertial guidance and terminal active radar homing. They are capable of targeting the enemy aircraft or missiles at short-range (20 km) as well as at BVR (over 70 km).

IAF is also in the process of integrated the Astra with its Dassault Mirage 2000, Mikoyan-Gurevic MiG-29 fighters as well as the indigenous Light Combat Aircraft Tejas. The 154 kilogramme Astra is 3.57 metres long with a diametre of 178 milimetres. Its warhead is detonated by a radar proximity fuse. The maximum altitude from which the missile can be fired is 20 km. According to DRDO, Astra's maximum range is 110 km and there are plans to develop a 300-km range version too.

IAF LCA Tejas to have a special pilot; Defence Minister Rajnath Singh to fly in the fighter in Bengaluru