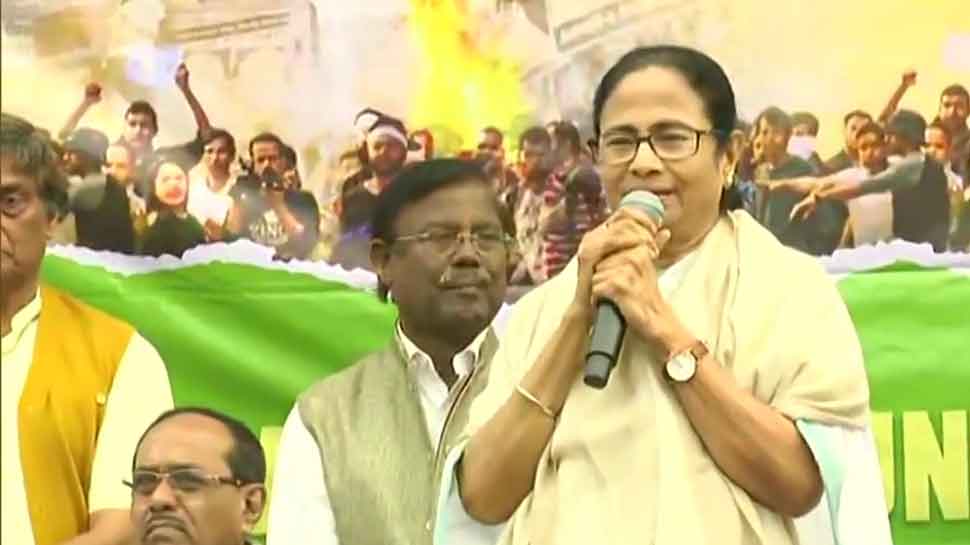 KOLKATA: West Bengal Chief Minister Mamata Banerjee on Thursday warned the BJP government at the Centre against implementing the controversial Citizenship Amendment Act, 2019 and the National Register of Citizens across the country. The firebrand Bengal politician alleged that the ruling BJP was trying to muzzle the protests against the amended citizenship law through brutal force.

Criticising the BJP government, the Trinamool Congress chief said, ''In the BJP-ruled states, particularly Uttar Pradesh, brute force is being used to curb the movement. But I would like to tell the BJP, don`t try to muzzle the movement through force. If anybody tries to terrorise people and use brute force, then the people of the country, of Bengal, will not support that."

The TMC supremo said that ''I’ve been part of students agitation. In Assam, after NRC, 18 lakh people’s names were omitted. I had sent a three-member delegation to Lucknow so that we don’t violate the section 144 CrPC. They were prevented from coming out of the airport. You’re coming every day here, eating sweets, creating a disturbance, they took out a rally in Central Kolkata, Siliguri our organisation cancelled their rally in Asansol for their rally.''

Speaking on the CAA issue, Mamata said, ''I don’t know when my mother was born. I know my mother’s and father’s date of death but don’t know when they were born. If I cannot tell, how can you? First, they pressed for Aadhar card, now saying not important. They spent crores.''

''BJP is lying. This is not just a fight for Muslims. It is also a fight for Hindus. If they snatch our rights then how will we survive?'' she asked.

She warned that the agitation for protecting one`s rights will continue, even if "one has to give one`s life for that." "The movement will continue till the law is scrapped," Banerjee said at Rajabazar in north Kolkata before leading yet another march against the controversial Citizenship Amendment Act.

West Bengal Chief Minister Mamata Banerjee during protest march against #CitizenshipAmendmentAct and #NationalRegisterofCitizens, in Kolkata: I will tell all the students to continue their protest for their democratic rights, in a democratic way https://t.co/WE5KmaY5BJ pic.twitter.com/E8z3RqhvAy

Attacking the BJP government in Karnataka, Mamata said that the state's CM had announced compensation for deceased, but later took it back. ''He said that they were criminals,'' Mamata said.

West Bengal CM Mamata Banerjee during protest against #CitizenshipAmendmentAct & NRC, in Kolkata: We will pay cheque of Rs. 5 lakhs each to the families of those who lost their lives in Mangaluru during protests. pic.twitter.com/tq8CCxD0hF

Amid a massive gathering in the Muslim-dominated pocket, Banerjee extended full support to the students fighting against CAA and a proposed National Register of Citizens.

"The students are being threatened that their careers will be finished. They should not bow to these threats and continue their protests," she said amid blowing of conch shells and incessant slogans of "No CAB, No NRC".

Despite the CAB or the Citizenship amendment Bill becoming an Act, Trinamool is still using 'CAB' in most of its posters and slogans.

The march went past Narkeldanga, Sealdah station, Acharajya Jagadish Chandra Bose Road, Nonapukur before culminating at Mullickbazar, as innumerable people lined both sides of the streets to welcome Banerjee. This is Banerjee`s fifth march in Kolkata on the issue.

As per the Act, such communities will not be treated as illegal immigrants now and will be given Indian citizenship. The legislation has led to intense protests in most parts of the country, and over 20 people have died during the agitation so far. In Bengal, trains, buses and railways stations have been torched and vandalised, and roads and train tracks blockaded by the protesters.