Prime Minister Narendra Modi, who led the International Yoga Day celebrations in Jharkhand's Ranchi, said on Friday that the motto of Yoga is to promote peace, prosperity and harmony. 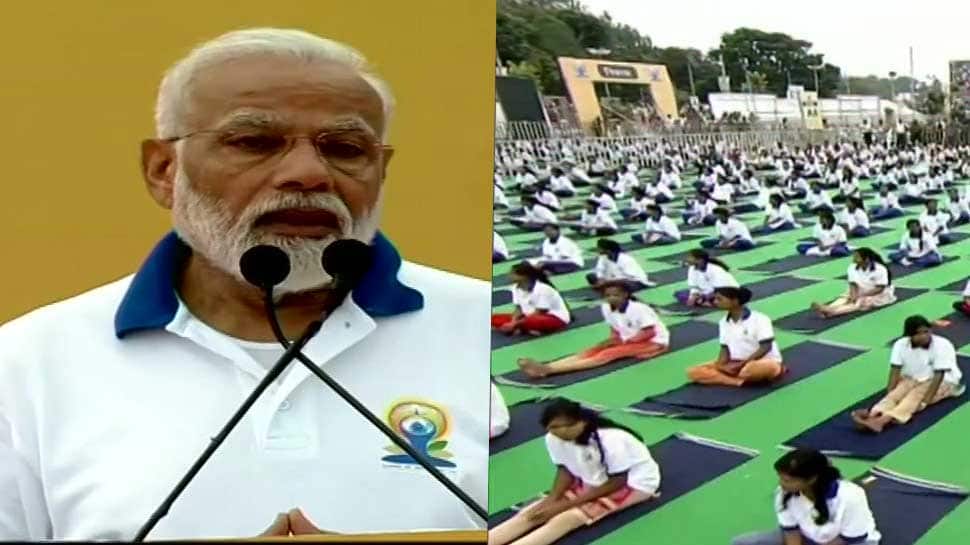 RANCHI: Prime Minister Narendra Modi, who led the International Yoga Day celebrations in Jharkhand's Ranchi, said on Friday that the motto of Yoga is to promote peace, prosperity and harmony.

"Yoga has always been associated with peace and harmony. I thank people for adopting Yoga. I urge people to embrace it," PM Modi said while addressing a gathering of over 30,000 people who assembled at the Prabhat Tara Ground here to participate in the fifth World Yoga Day celebration with the Prime Minister.

PM Narendra Modi at Prabhat Tara ground in Ranchi: We all know the importance of Yoga very well. It has always been an important part of our culture. But now we all have to take the practice of Yoga to another level. #InternationalDayofYoga #Jharkhand pic.twitter.com/bPlcOBi5ns

He also thanked the Yoga enthusiasts from across the world for participating in the Yoga Day events.

PM Modi in Ranchi:I thank people across the world for joining Yoga Day celebrations, world over the first rays of the sun are being welcomed by dedicated yoga practitioners, it is a beautiful sight. I urge you all to embrace yoga and make it an integral part of your daily routine pic.twitter.com/dONTf8tU8o

PM Modi also spoke in English for a few minutes to reach out to the global audience .

Stating that "Yoga is beyond caste, religion, region and any boundaries", the Prime Minister added "there is a solution to alcoholism and diabetes in Yoga".

He stressed the need for research in Yoga so that the world could be updated about its benefits. He also expressed concern about the rising heart-related problems among the youth in the country.

"This year, Yoga`s theme is Heart Care. There has been a manifold increase in the heart-related problems in the country, particularly among the young generation. Yoga should be adopted as preventive measure," PM Modi said.

The Prime Minister also interacted with people after performing yoga at Prabhat Tara Ground in Ranchi.

Besides PM, top government functionaries, including Home Minister Amit Shah and senior BJP leaders are attending the International Yoga Day events across the country on Friday.