No confidence motion a result of their sheer arrogance: PM Narendra Modi goes on the offensive in Lok Sabha

Modi mocked Rahul Gandhi walking over to him for a hug earlier in the day. 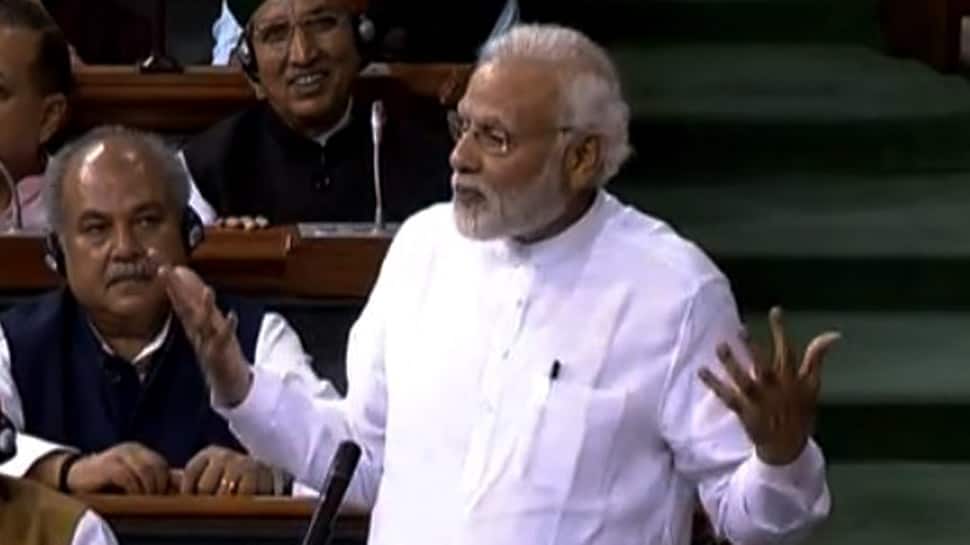 NEW DELHI: Prime Minister Narendra Modi came out swinging on Friday evening, in his reply in the Lok Sabha on the no confidence motion moved by opposition parties.

He attacked the no confidence motion as an event that demonstrated the arrogance of those who pushed for it, knowing that it would fail.

He also attacked and mocked members of the opposition parties, even as some of them raised slogans in the House.

Here are the top quotes from PM Modi's reply in the Lok Sabha:

-     I urge all parties to reject the motion that has been moved in the House.
-     Today the nation has seen the negativity expressed by some members. India has seen how some people are so deeply opposed to development.
-     Why did you bring the no confidence motion if you were not prepared to debate it? Why were you trying to delay the motion by asking for a two-day extension?
-     They have not moved the no confidence motion because they do not understand, not because they are ignorant. The only reason they have pushed for it knowing very well how the vote will go is sheer arrogance.
-     They have only one goal, and keep stating it - remove Modi.
-     This morning, one member rushed over to me saying, 'Get up, get up.' What is his hurry to come to power? I would like to tell this member that it was the people of this country who elected us. That is how we sit here.
-     Just because they want to remove Modi from this position, look at all the kind of people they have brought together.
-     The Congress has no faith in the RBI. They have no confidence in EVMs. They have no confidence in the Election Commission, RBI judiciary or international agencies. The Congress don't even have confidence in themselves. Their behaviour today has made this clear.
-     Just because of one careless allegation made in this House, both India and France were forced to release statements.
-     I appeal to the Congress, please do not bring politics into issues of national security.
-     You called the surgical strikes a farce. You may abuse me as much as you want. But stop insulting the soldiers of India. I cannot tolerate such insults to our armed forces.
-     This is not the first time that the Congress is trying to destabilise someone who tried to replace them.
-     Atal ji replaced them, they destabilised his government. They did the same to everyone who tried to replace them. Isn't this what they did to Deve Gowda, IK Gujral, Chanda Shekhar, Charan Singh and Morarji Desai.
-     The Congress has twice tried to undermine the power of the vote with the power of the note.
-     Atal ji created three states - Uttarakhand, Chhattisgarh and Jharkhand. It was done peacefully. These states are on their way to prosperity.
-     The Congress divided Andhra Pradesh and they did it shamefully. The two new states are still grappling with many unresolved issues.
-     The NDA government is committed towards the development of Andhra Pradesh and Telangana.
-     We only now have phone banking. But they came up with their own version of phone banking many years ago. Just a phone call would be enough to get their cronies loans from the banks.
-     It is this 'phone banking' that has contributed to the NPA problem for the public sector banks.
-     Every time their cronies failed to repay their loans, they were given more loans. When they failed a second time, they were given a third loan. This is what the Congress has done and left us to handle.

France refutes his claim on Rafale, but Rahul Gandhi says it doesn't matter