Heavy police personnel was deployed and security tightened ahead of the protest march. The UP Police has already imposed Section 144, which prohibits the assembly of more than five people. 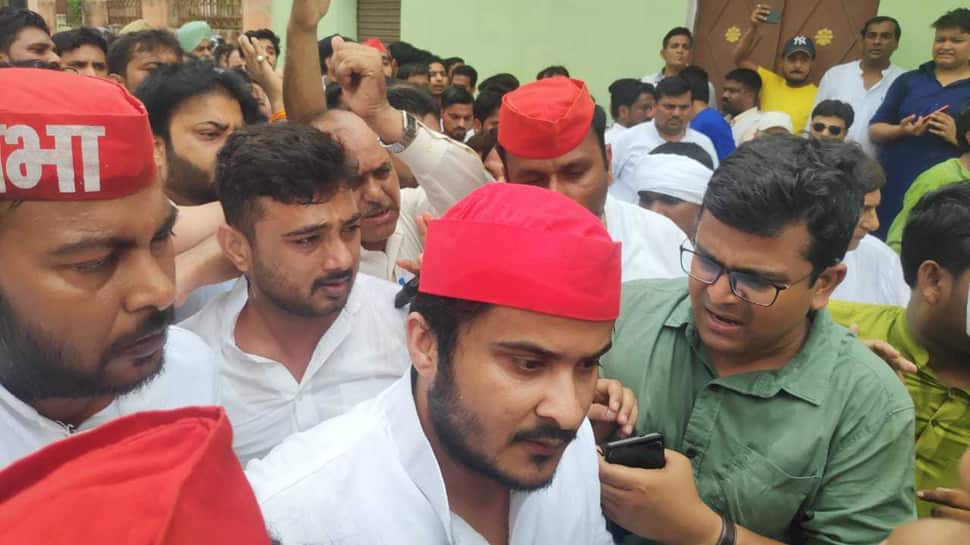 A day after the detention of Samajwadi Party (SP) MLA Abdullah Azam Khan, son of SP MP Azam Khan, the party workers on Thursday started a protest march towards Rampur district in Uttar Pradesh resulting in a brawl with the state police. Abdullah Azam and his supporters arrested by police for violating Section 144 in Rampur.

Heavy police personnel was deployed and security tightened ahead of the protest march. The UP Police has already imposed Section 144, which prohibits the assembly of more than five people. Several dozens SP workers have also been arrested since morning.

On the instructions of SP president Akhilesh Yadav, all the party leaders and workers from Moradabad and Bareli have been trying to reach Rampur, in a big show of strength to support the father-son duo. However, their efforts have been foiled due to the strict vigilance of the police.

Abdullah Azam (son of Samajwadi Party MP Azam Khan) & his supporters arrested by police for violating section 144 (prohibits assembly of more than 5 people in an area) in Rampur. pic.twitter.com/A9Hpe5mWUC

Abdullah Azam was released from police custody on a personal bond on Wednesday evening after he was detained for allegedly obstructing raids being conducted at the Maulana Ali Jauhar University in Rampur. The UP police had conducted raids in the premises of the university, which is headed by Azam Khan and as per sources as many as 2,000 stolen, rare and valuable, books were recovered from the library during the raids.

The police are keeping a strict vigil on the Rampur road from Moradabad. Large number of police personnel have been deployed on the Kashipur intersection, where the SP workers are not being allowed to move forward.

Police prevented SP MLA Haji Rizwan from reaching Rampur. Police reached outside the house of the legislator. During this, there was a clash between the police and the supporters of the MLA. Rizwan said that Azam Khan is being harassed unnecessarily and that "the state government is showing frustration"

He also said, "We will run rivers of our blood but will not let the flag of the party bend. We are forcibly stopped which is against democracy. We will definitely go to Rampur."

"Section 144 is already in place in view of Kanwar Yatra and Bakra Eid. We have got additional forces, we will not let anyone enter from the border. Anyone who violates law and order will be dealt with strictness," AK Singh, District Magistrate (DM), Rampur said. Kanwar Yatra is scheduled to continue till mid-August while Eid al-Adha will be celebrated around August 12.

Abdullah Khan was arrested under section 151 (Knowingly joining or continuing in assembly of five or more persons after it has been commanded to disperse) of the Indian Penal Code.

Earlier last week, locals who registered FIRs against MP Azam Khan in connection with land encroachment cases in Rampur district met Governor Ram Naik and demanded action against Khan. The total number of FIRs, as per the police, against Khan, now stands at 26 in cases relating to land grab. The police said the complaints against him were verified and found to be genuine. According to the complaints, the farmers' lands were illegally occupied through unscrupulous means.