Tamil Nadu Chief Minister K Palaniswami cited an example of 18 disqualified AIADMK rebel MLAs who sided with Dhinakaran in 2017 after he merged his led faction with that of his present deputy O Panneerselvam, who has renewed his assertion of 'retrieving' the ruling AIADMK post V K Sasikala's release. 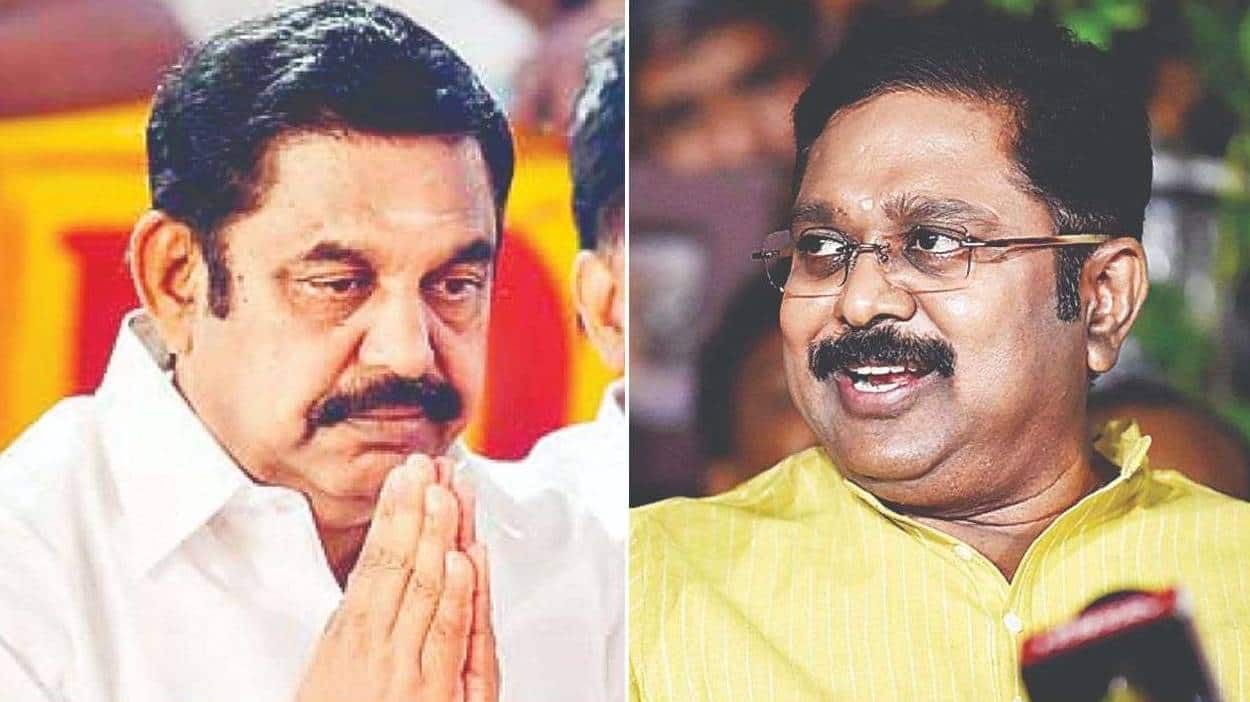 Chennai: Tamil Nadu Chief Minister K Palaniswami on Tuesday hit out at AMMK leader T T V Dhinakaran, who has renewed his assertion of 'retrieving' the ruling AIADMK post V K Sasikala's release, saying those who go behind him will be "left in the lurch."

The MLAs loyal to Dhinakaran were disqualified when they rebelled against Palaniswami in 2017 after he merged his led faction with that of his present deputy O Panneerselvam.

In his address, Palaniswami also lashed out at DMK, dubbing it a 'coprorate' company helmed by M K Stalin as its 'chairman'.

Targeting Dhinakaran, Palaniswami said he was not even an AIADMK member for 10 years, referring to his expulsion by late chief minister and then party supremo J Jayalalithaa in 2011, along with her confidante Sasikala, whom she later reinstated, and others.

"He himself declared that he had joined the party (again) after Amma's (Jayalalithaa) death. He made so many efforts to wrest control of the party after joining. He held 18 of our MLAs under his control. Later he left them in the lurch," the chief minister charged.

Anybody believing Dhinakaran will be left in the lurch, Palaniswami said.

Efforts were on to see that there was a setback to AIADMK and enable DMK come to power, he alleged.

"The AIADMK will counter that too," he asserted.

Earlier in the day, Dhinakaran had said efforts to 'retrieve' the ruling party will be on, especially in the wake of the return of his aunt and expelled AIADMK leader Sasikala from Bengaluru, after serving a four year jail term in the Rs 66.65 crore disproportionate assets case.

Palaniswami said both AIADMK founder, late chief minister M G Ramachandran and Jayalalithaa were always keen that the "evil force DMK" should not come to power.

The ruling AIADMK will shatter all "conspiracies" and ensure another term in the coming polls, likely in April-May, he said.

Taking on arch rival DMK, he slammed it over the issue of the release of the seven life convicts in the Rajiv Gandhi assassination case, recalling that the party government, under the late M Karunanidhi, had recommended implementation of the court verdict (death penalty).

The cabinet had then recommended commuting the death sentence of Nalini alone since she had a child, he said.

However, it was the late Jayalalithaa who brought an Assembly resolution, demanding the release of all seven later, he recalled and pointed out that his-led cabinet had also adopted a similar resolution, in 2018.

The DMK was now "fooling the people" by seeking the release of all seven.

Insisting that DMK was not a party, Palaniswami said it was a 'corporate company.'

"Stalin is the chairman and his family members-- Udhayanidhi (son), Kanimozhi (sister) and Dayanidhi (Maran) are (in the) Board of Directors," he said and asked why senior leader Durai Murugan, who hails from here, has not been given due importance.

He wondered why Udhayanidhi Stalin was involved in campaigning whereas Durai Murugan was not, despite being a long time MLA.

Training his guns on Stalin, Palaniswami said he had made his way to the top because of his father Karunanidhi, but said, "I came up through hard work."

The chief minister also listed out the various pro-people initiatives of his government.

Further, he announced that the birthday of popular spiritual orator Kirubananda Variyaar, who was born in this district, on August 25 every year, will be celebrated by the government.