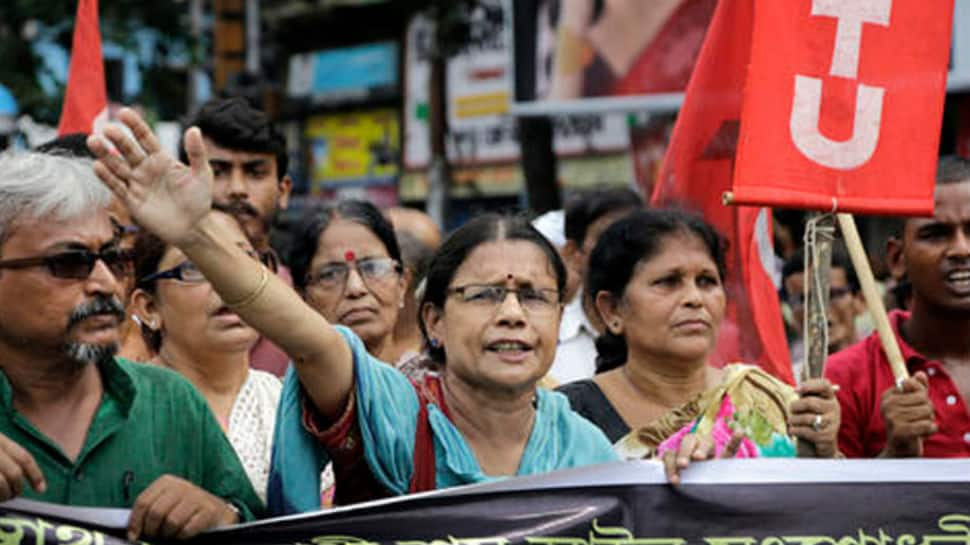 New Delhi: Ten major trade unions in the country have called for a 48-hour strike starting Tuesday against what they allege are anti-worker policies of the Narendra Modi government. Key services could take a big hit over Tuesday and Wednesday with reverberations of the strike likely to be felt in banking, insurance, city-based public transport and railways.

Ten trade unions who have jointly called for the nationwide general strike are INTUC, AITUC, HMS, CITU, AIUTUC, AICCTU, UTUC, TUCC, LPF and SEWA.  Farmers across the country under the aegis of the Left peasant wings are also expected to join the strike. "AIKS and Bhumi Adhikar Andolan will observe 'gramin hartal', rail roko and road roko on January 8 and 9, the day trade unions are observing nationwide general strike. This move is against the Modi government's failure to address rural distress issues, to save rural farmers' lands from the corporates. The farmers will extend all support to the ensuing general strike," said Hannan Mollah, general secretary of the CPI(M)-affiliated All India Kisan Sabha.

It is estimated that a total of 20 crore workers from across the country could participate in the strike. This is an increase by seven crore over figures of workers who had participated in the two-day strike called in 2013.

The failure to fulfil the promise of creating over 1 crore jobs a year has been an important reason cited by the trade unions for organising the strike against the Modi government. According to Labour Bureau statistics, 1.55 lakh jobs and 2.31 lakh jobs were created in 2015 and 2016, respectively.

AITUC has said that a massive protest march would be taken from Delhi's Mandi House to the Parliament on Wednesday. She added that similar marches would be organised across the country over the 48-hour bandh period. It is also likely that the agitating workers could organise 'Rail Roko' and 'Raasta Roko' although unions have said that the strike would be peaceful in nature.