Several UAE Government ministers were also present in the ceremony that lasted for more than 2 hours.

NEW DELHI: The foundation stone laying ceremony of the first traditional Hindu temple in Abu Dhabi being built in Abu Dhabi, UAE took place on Saturday in the presence of more than 2000 members of the Hindu community and the Indian envoy to UAE, Navdeep Suri.

Several UAE Government ministers were also present in the ceremony that lasted for more than 2 hours.

Reading out PM Narendra Modi's message, the Indian envoy said, "The temple will reflect India's timeless values of faith, harmony and love. I am sure, this temple will be a source of inspiration, for 33 lakh Indians residing in UAE, as well as for the people from all other communities"

The PM, in his message, said that the temple "embodies the timeless Vedic values of Vasudhaiva Kutumbakam (the whole world is one family)" and once completed, the temple "will symbolise the universal human values and spiritual ethos that form a shared heritage of both India and UAE." 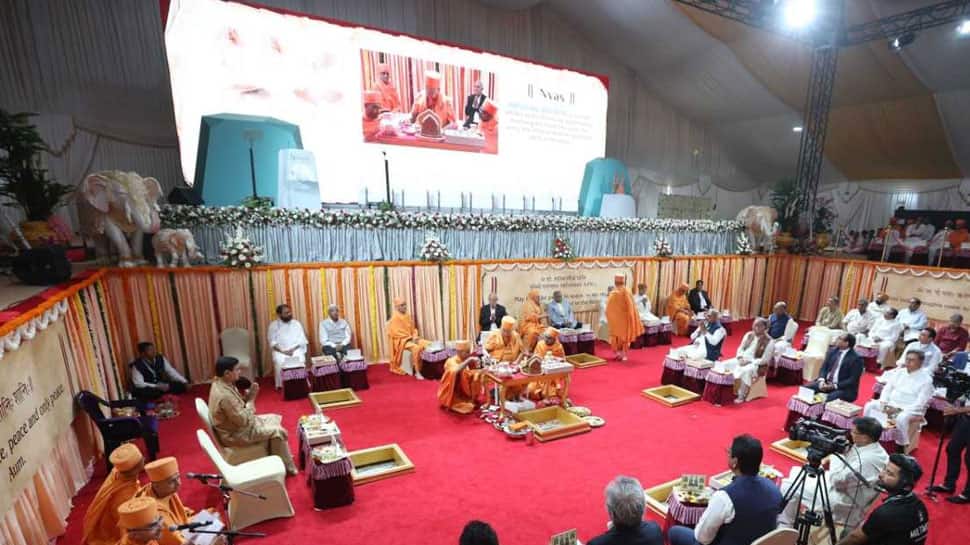 Conveying the greetings "on behalf of 130 crore Indians" to "dear friend" and the Crown Prince of Abu Dabhi, Mohammed bin Zayed Al Nahyan, PM Modi said he "deeply appreciate his vision for the future of India-UAE ties'' and placed "on record" New Delhi's appreciation of the "continued support of UAE."

Mahant Swami Maharaj, the sixth spiritual successor of Bhagwan Swaminarayan and the spiritual head of BAPS Swaminarayan Sanstha, presided over the foundation stone laying ceremony of the BAPS Hindu Mandir in Abu Dhabi.

In 2015, the UAE government had decided to allot a plot of land for construction of a temple during PM Modi's first visit to the west Asian country.

Saturday's development comes in the backdrop of UAE celebrating its year of tolerance and this temple, PM said is "an expression of UAE of there love and friendship and faith in India"

PM Modi witnessed the ground-breaking ceremony of a temple through live feed and had unveiled a replica of the temple complex in Dubai in February 2018 during his visit to the country.

The UAE-India ties in the last few years have grown manifold especially with a number of high-level visits.

PM Modi first visited the country in August 2015 which was followed by the visit of Crown Prince of Abu Dhabi Sheikh Mohamed bin Zayed Al Nahyan in 2016.

Just a few weeks ago, PM Modi was honoured by the highest civilian award -The Zayed Medal - of the country.

Earlier this year, in a first, UAE invited India as a Guest of Honour at the Organisation of Islamic Cooperation Foreign Ministers meet despite reservations from Pakistan.

More than 3 million Indians have made the country their home and there are approximately 1000 direct flights per week between various destinations of India and the UAE.