Vinata Aeromobility aims to perform flight trials of their hybrid-electric flying car by 2023 and make it available for commercial flights by 2025. 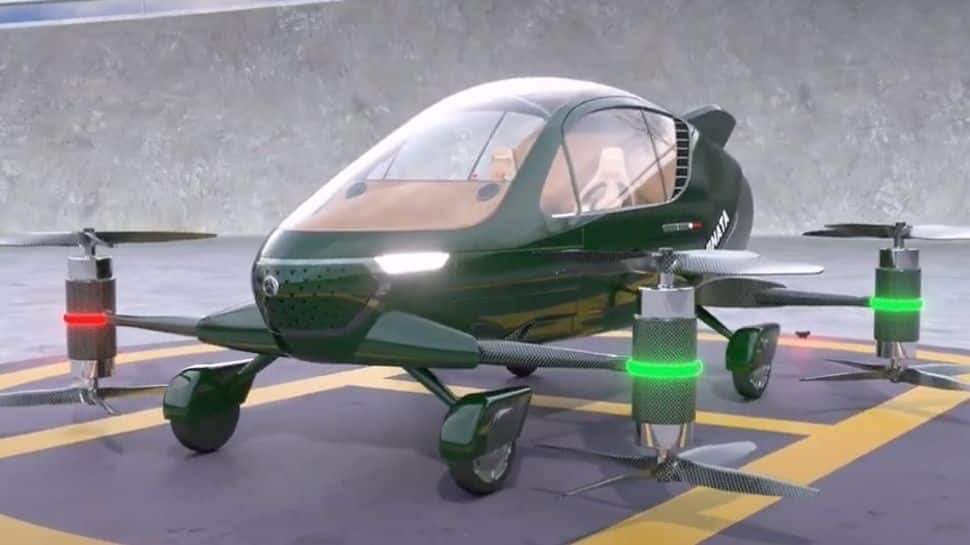 Chennai: Yogesh Ramanathan, founder and CEO of Vinata Aeromobility, said his company hopes to perform flight trials of their hybrid-electric flying car by 2023 and make it available for commercial flights by 2025.

At present, they have the proof-of-concept for their technology and a scaled-down model is ready. Their designs show a 1-ton-weighing, two-seater vehicle that resembles a quadcopter. The company says that their vehicle is designed to carry a payload of 250 kgs, at a top speed of 120kmph, with a 60-minute flight time endurance, while being powered by both bio-fuel and batteries.

In a conversation with Zee media, Yogesh elaborated on the plans of his company and the flight path that lay ahead for them.

The proposed vehicle is said to be made of light-weight and high-strength carbon fibre and composites and would be totally autonomous, while also providing the option for an on-board pilot. “We are working on this vehicle from 2019, flying car has been everyone’s childhood fascination. We’ve always wondered about how automobile technology is proven and aviation technology is proven, but why is there no flying car? I thought of using my experience in Industrial automobile engineering and ventured into my entrepreneurial journey,” Yogesh says.

They are a 15-member team with engineers from various domains, guided by veterans in the field of aviation and related disciplines. “Our goal is to reduce the hours taken for transportation to minutes and we are designing our vehicle with that in mind,” he said. He adds that the vehicle is designed keeping in mind passenger safety. According to him, the vehicle features Distributed Electric Propulsion (DEP), which uses multiple propellers and motors, in order to act as a backup in case of a failure. The working motors and propellers would be able to safely land the flying car. This is in addition to the backup power which provides electricity to the motor, in case the generator (bio-fuel) power is interrupted.

Queried about the investment that went into the project, Yogesh said that the initial funding was from his own sources in the family. However, he added that they were looking at external funding in order to work on the full-scale model. He envisions the market cost of an operational flying-car at around Rs 4-5crore. In terms of their business model, Vinata is looking at the sale of the vehicles, besides offering them as a service, based on demand. He added that their firm was looking at setting up a large R&D facility in one of the Indian states and is looking forward to Government support for the same.

On when he foresees his technology to be a reality, he said, “We are hoping to have flight trials with our full-scale model by 2023 and hope to make it available for the common man by 2025, by when we would also establish Vertiports for Vertical take-off and landing”. Interestingly, their vehicle is not just about vertical take-off and Landing (VTOL). Yogesh says that it would also be capable of traveling short distances on wheels, using its batteries.

Once this takes off, flying cars would be used for transporting people & cargo, as well as for providing medical emergency services. My best wishes to the team. #DroneRevolutionBegins

India’s Minister for Civil Aviation, Jyotiraditya Scindia had recently tweeted about having seen the concept model of the hybrid flying car. “Once this takes off, flying cars would be used for transporting people & cargo, as well as for providing emergency medical services,” read his tweet. The team is also headed for London to unveil their concept in greater detail at the Helitech Exhibition in London.