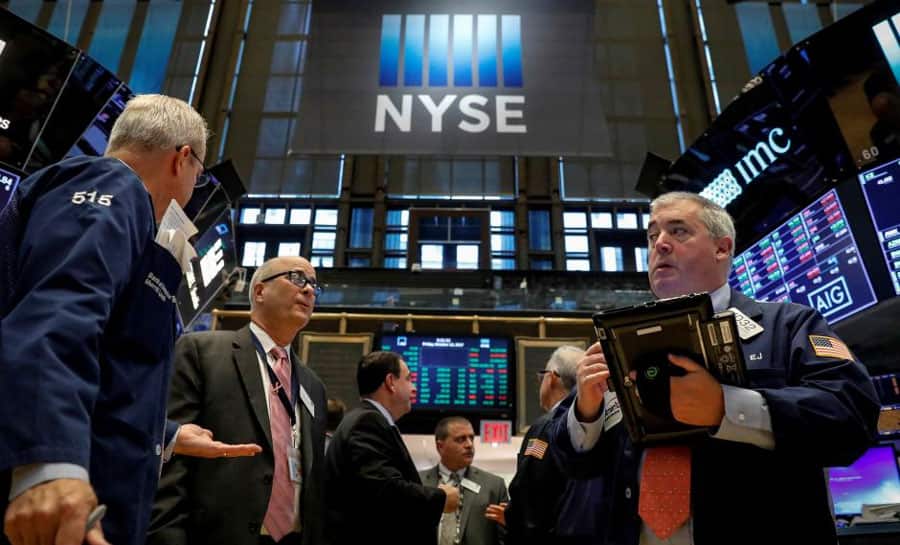 New York: US stocks plunged around 4 percent on Thursday in another dramatic session, confirming a correction that has thrown the market`s nearly nine-year bull run off course.

The bottom of this recent slide remained elusive for investors, who have been whipsawed this week by huge swings that have shaken a market that had only climbed steadily for months.

With Thursday`s drops, the benchmark S&P 500 and the Dow industrials confirmed they were in correction territory, both falling more than 10 percent from January 26 record highs. The S&P 500 slumped 3.8 percent on Thursday, while the Dow dropped 4.2 percent or over 1,000 points as losses accelerated late in the trading day.

The S&P 500 last confirmed a correction in January 2016, when it fell 13.3 percent amid concerns about a slump in oil prices.

The S&P closed below the intraday low it had hit on Tuesday, a key level traders had been watching.

Thursday marked another day of recent sharp swings including the S&P 500`s biggest drop in more than six years that pulled equities away from record highs.

"The dust hasn`t settled yet, and I think both buyers and sellers are trying to figure out what this market really wants to do," said Jonathan Corpina, senior managing partner for Meridian Equity Partners in New York.

"I would think that this continues to happen for the next few trading sessions for everything to kind of get flushed out."

The retreat in equities had been long awaited by investors as the market climbed to record high after record high with few bumps. The S&P correction is the fifth of this bull market, according to Yardeni Research. The last bear market was during the 2008 financial crisis.

The sharp selloff in recent days was kicked off by concerns over rising inflation and bond yields, sparked by Friday`s January U.S. jobs report, with investors pointing to additional pressure from the violent unwinding of trades linked to bets on volatility staying low.

Equities for years have looked relatively attractive compared to the low yields offered by bonds, but the rise in Treasury yields has diminished the allure of stocks, especially with stock valuations at historically expensive levels.

All 11 major S&P sectors finished lower, with financials and technology the worst-performing groups. All 30 components of the blue-chip Dow finished negative.

Amazon and Facebook two of the big stocks that had led the S&P`s rally over the past year, were among the biggest drags on Thursday.

Thursday`s slide put the S&P 500 back into negative territory for the year, down 3.5 percent.

Machine-guided, numbers-obsessed fund managers may keep selling pressure on stocks this week as they come to terms with the market`s wild trading.

Investors are weighing whether the sharp swings are the start of a deeper correction or just a temporary bump in the prolonged bull market.

A new survey by the American Association of Individual Investors showed the percentage of U.S. individual investors expecting a decline in stock prices has hit a three-month high.

Volatility remained high compared to recent months. The market`s main gauge of volatility, the Cboe Volatility Index, rose 5.73 to 33.46 on Thursday, about three times the average level of the past year.

"A lot of people have been forced to put on positions that will need to be either wound down or rolled forward," Cherry said.

Thursday marked another session this week with strong volume. About 10.6 billion shares changed hands in U.S. exchanges, well above the 8.2 billion daily average over the last 20 sessions.

Declining issues outnumbered advancing ones on the NYSE by an 8.26-to-1 ratio; on Nasdaq, a 5.58-to-1 ratio favored decliners.