Clashes broke out between workers of Telugu Desam Party (TDP) and YSR CongressParty (YSRCP) at various places in the state as voting started. 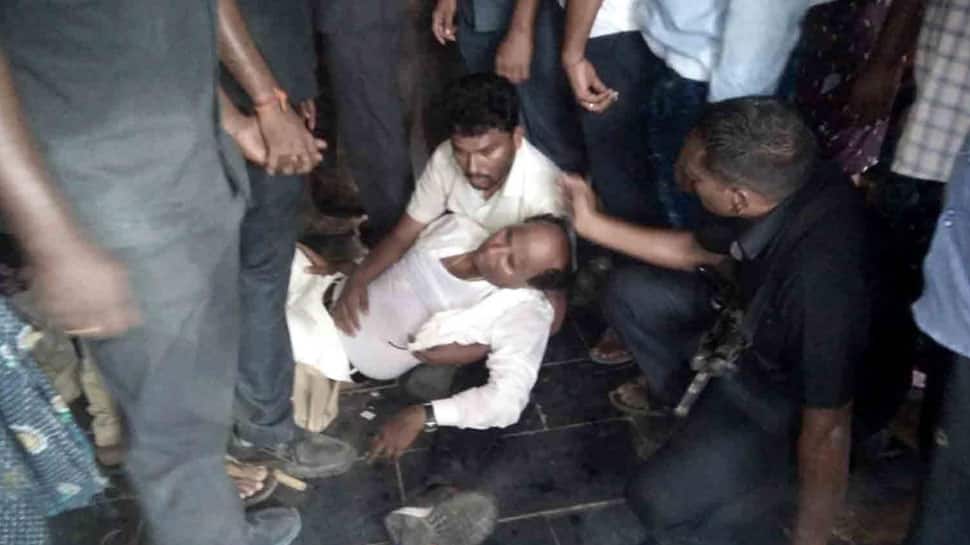 The polling for the Lok Sabha and Assembly elections took place in Andhra Pradesh on Thursday amidst several violent clashes across the state. Clashes broke out between workers of Telugu Desam Party (TDP) and YSR CongressParty (YSRCP) at various places in the state as voting started.

In a polling station at Srinivasapuram village of Gurajala assembly constituency in Guntur district, clashes broke out between the TDP and YSRCP workers while the polling was underway.

A TDP leader, S Bhaskar Reddy, was killed during clashes at Tadipatri town, a stronghold of controversial TDP leader JC Diwakar Reddy, whose son Pawan Kumar was in the fray on TDP ticket. TDP leaders have accused the YSRCP workers of killing Reddy.

#WATCH Andhra Pradesh: A clash broke out between workers of TDP and YSRCP at a polling station in Srinivasapuram Village of Gurajala assembly constituency in Guntur district. #IndiaElections2019 #AndhraPradeshElections2019 pic.twitter.com/lF0edCFuFf

YSRCP supporters alleged that the TDP cadres forcefully stopped one of their supporters outside the polling booth when the voting was going on. When YSRCP supporters opposed, a clash erupted among them in which electronic voting machines (EVMs) and other polling materials were destroyed.

Former Speaker and TDP leader Kodela Siva Prasad Rao was badly attacked by YSRCP supporters at Yanamatla village in Sattenapalli in Guntur district, where he had gone to see the polling.

A clash broke out between YSRCP and TDP workers in Puthalapattu Constituency in Bandarlapalli, Andhra Pradesh and the police resorted to lathi-charge.

#WATCH Jana Sena MLA candidate Madhusudhan Gupta smashes an Electronic Voting Machine (EVM) at a polling booth in Gooty, in Anantapur district. He has been arrested by police. #AndhraPradesh pic.twitter.com/VoAFNdA6Jo

At Gudem Cheruvu town at a polling station in Jammalamadugu Mandal of Kadapa district, TDP and YSRCP supporters clashed in which one YSRCP worker was injured. He was shifted to the nearby hospital for treatment. A tense situation also prevailed for some time at Machilipatnam, following a verbal altercation between workers of YSRCP and JSP. The police intervened immediately and controlled the situation.

Police said a YSRCP worker were killed in a poll-related group clash in Anantapuramu district of Andhra Pradesh. The clash occurred at Veerapuram village under Tadipatri Assembly constituency in the afternoon. The deceased have been identified as Pulla Reddy of YSRCP.

Andhra Pradesh: A YSRCP worker has been taken to a hospital after he was injured in a clash which broke out between YSRCP and TDP workers at a polling station in Jammalamadugu Mandal of Kadapa district today. #IndiaElections2019 #AndhraPradeshElections2019 pic.twitter.com/JTQ0c7AnWL

TDP and the YSRCP workers clashed at Ramanakkapeta village in Nuzividu assembly constituency. The police immediately intervened to restore normalcy.

In Anantapur district's Guntakal, former MLA and contesting candidate of Jana Sena Party, Madhusudan Gupta, smashed an EVM in a fit of rage alleging that party symbols were not properly printed on the ballot unit. He also shouted at the polling personnel on duty. He was immediately arrested by the police.

Andhra Pradesh, which went to polls on Thursday to elect 25 members of the Lok Sabha and 175 members of the State Legislative Assembly, recorded over 54 per cent polling till 5 pm. The counting of votes will take place on May 23. This is the first general election in the state after bifurcation of Andhra Pradesh and creation of Telangana in June 2014.