The seats where voting will be held are Nalanda, Patna Sahib, Patliputra, Ara, Buxar, Sasaram, Karakat and Jahanabad. 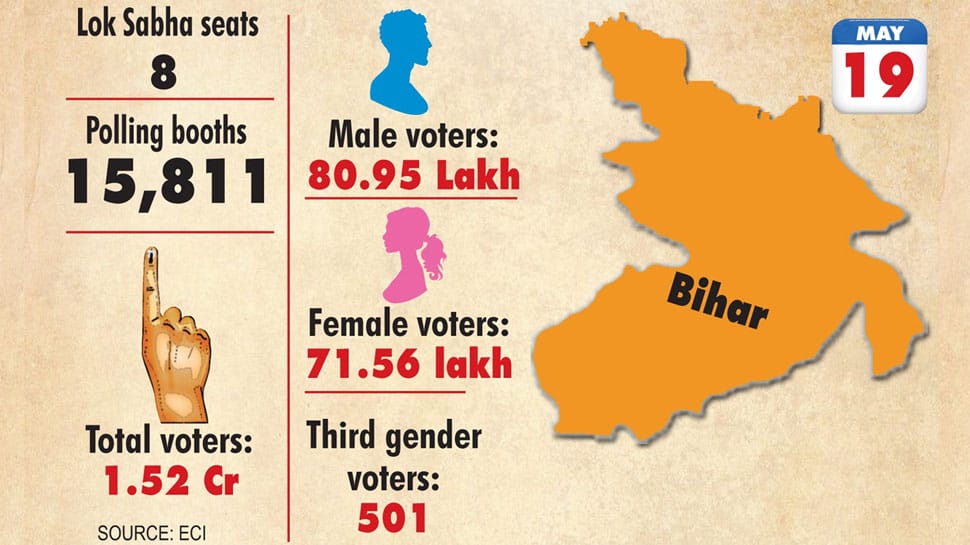 Eight Lok Sabha seats of Bihar will go to polls in the sixth phase of general election on Sunday, May 19. The seats where voting will be held are Nalanda, Patna Sahib, Patliputra, Ara, Buxar, Sasaram, Karakat and Jahanabad. 157 candidates, including 20 female candidates are in the fray for these 8 Lok Sabha seats. While Nalanda, Patna Sahib, Patliputra, Arrah, Buxar, Karakat, and Jahanabad are general seats, Sasaram is reserved for Scheduled Caste candidates.

Approximately 1,52,52,608 voters are eligible to cast their votes on Sunday. 8095447 of the electorate comprises of male members, 7156660 are females and 501 are third gender voters. The Election Commission has set up 15,811 polling stations across these 8 seats to ensure smooth conduct of polls.

Here is the list of candidates going to polls in Bihar:

Ahead of the voting for the last phase, Prime Minister Narendra Modi held three rallies - one each in Pataliputra, Buxar, and Sasaram constituencies - where he was joined by alliance partners Chief Minister Nitish Kumar. BJP president Amit Shah held rallies in Pataliputra and Arrah where party MPs and Union ministers Ram Kripal Yadav and RK Singh, respectively, are in the fray. He also held a roadshow in Patna Sahib in support of Union minister Ravi Shankar Prasad, who has been fielded to retain the seat for the party by wresting it from Shatrughan Sinha.

Congress president Rahul Gandhi also held a rally in Pataliputra in support of jailed RJD supremo Lalu Prasad's eldest daughter Misa Bharti. He also held a roadshow in Patna Sahib where actor-turned-politician Shatrughan Sinha is seeking re-election for the third consecutive term, but this time as a Congress candidate.

I will be assassinated like Indira Gandhi, BJP after my life: Arvind Kejriwal