Agra is the largest while Nagina is the smallest (in terms of electorate size) among the eight constituencies in UP which would vote in the second phase of Lok Sabha election 2019.

New Delhi: The politically-charged state of Uttar Pradesh will see 1.4 crore voters across eight constituencies here participate in the second phase of Lok Sabha election 2019 this Thursday. The biggest of these constituencies is Agra with over 19 lakh people here eligible to cast their vote.

Mathura has been in the news in recent weeks due to sitting MP Hema Malini's campaigning here. The actor-turned-politician had had a decisive win from here in the Lok Sabha election 2014 and is confident of an encore. The BJP candidate even got husband and veteran actor Dharmendra to campaign for her. She faces RLD's Narendra Singh.

In Agra, it is a three-way battle between BJP's SP Singh Baghel, BSP's Manoj Kumar Soni and Preeta Harit of Congress. While Agra has a sizeable Dalit population, BSP has never won from here but is hoping that its partnership with Samajwadi Party is able to propel it past the finish line. BJP, however, wants to leave nothing to chance and replaced sitting MP Ram Shankar Katheria with UP minister Baghel.

Fatehpur Sikri is also of significance because Congress' UP president Raj Babbar is contesting from here. He will take on BJP's Raj Kumar Chahar and BSP's Shribhagwan Sharma. Political analysts feel that this here is one of the few constituencies in western UP where the fight would be directly between BJP and Congress whereas in most other places in the state, the SP-BSP-RLD alliance is the main rival face to BJP.

Overall, there are 85 candidates to choose from in UP in the second phase of election with 16,162 polling stations ready to welcome the electorate. 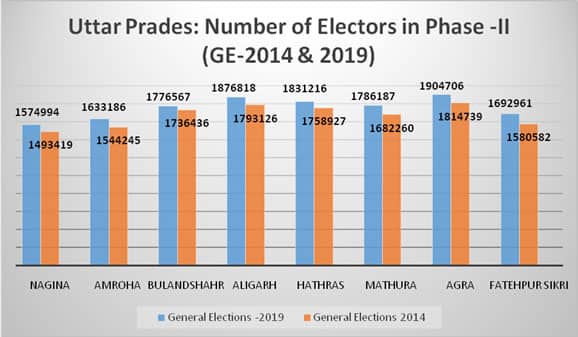 Interestingly, the number of eligible voters - as per Election Commission data - in these eight constituencies has gone up from 1.34 crore to over 1.4 crore this year - an increase of 5.09 per cent. Of these, there are 75.83 lakh men and 64.92 lakh women voters.