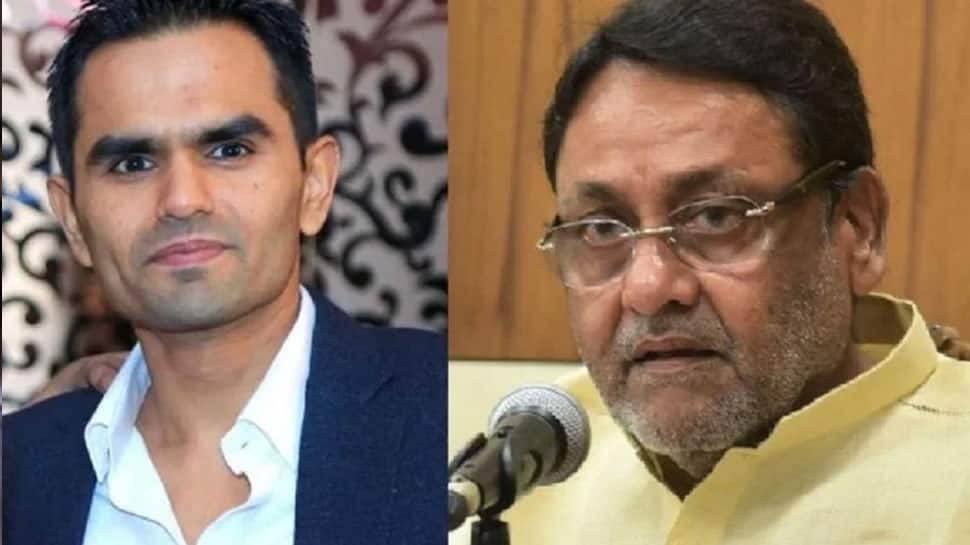 Mumbai: In an ugly twist to the Aryan Khan drugs case, NCP leader and Maharashtra Minister Nawab Malik has claimed that Narcotics Control Bureau's (NCB) Mumbai zonal director Sameer Wankhede is a Muslim by birth and his real name is 'Sameer Dawood Wankhede'.

Malik has also released what he claimed was the birth certificate of Sameer Wankhede and alleged that the latter had forged documents.

The senior NCP leader also shared the contents of a letter received by him from an unnamed NCB official in connection with the probe against Sameer Wankhede.

Here are the contents of the letter received by me from an unnamed NCB official.
As a responsible citizen I will be forwarding this letter to DG Narcotics requesting him to include this letter in the investigation being conducted on Sameer Wankhede pic.twitter.com/SOClI3ntAn

Speaking to a news channel, he said his son is like ‘Abhimanyu’ from the epic Mahabharat who is surrounded by enemies, but he will come out of this 'chakravyuh' (a military foundation to surround enemies) like Arjun.

Hitting back at Malik, the Wankhede senior said, “It is an absolute lie that my name is Dawood Wankhede. I think there is some malafide intention of Malik behind releasing that birth certificate of Sameer Wankhede and defaming us. My name is Dnyandev Wankhede since my birth and it is still the same.”

“I completed my graduation and post-graduation and even served in a state government department. How is it possible that none of them knew my name was not Dnyandev and it was Dawood? How come Malik alone gets the suspicious document?" he questioned.

Earlier in the day, Sameer Wankhede had denied Nawab Malik's allegations of forging documents, including his birth certificate, saying his father's name is Dnyandev, who was an excise official.

"My wife died six years ago. She had once prepared an affidavit in which it is mentioned that my name is Dnyandev Wankhede. I even have a valid caste certificate with me. And not just me, even my relatives have similar documents to establish it," the Wankhede senior claimed.

In a statement, Sameer Wankhede had mentioned that his father Dnyandev Kachruji Wankhede retired as senior police inspector of the state Excise department, Pune, in June 2007.

His father is a Hindu and his late mother Zaheeda was a Muslim, the official had said. “When my son and his first wife had a son, even on the latter's birth certificate my son's full name is mentioned in which my name is stated as Dnyandev Wankhede. Those people (Malik) should understand it. God knows from where Malik drew this connection,” he said.

Sameer Wankhede had also mentioned that he had married Dr Shabana Qureshi in 2006 under the Special Marriage Act. Both of them divorced mutually through a civil court in 2016. Later, in 2017, he married Kranti Redkar.

“It looks like Nawab Malik was hurt after his son-in-law (Sameer Khan) was put behind bars by the NCB earlier. He never uttered a word against the NCB when his son-in-law was in jail. Malik started speaking out only after he was released,” the Wankhede senior said.

When asked about the allegations of pay-off raised by an NCB witness, he said if Sameer Wankhede wanted a bribe from Shah Rukh Khan, he would have asked the actor to deliver it at home. "He would not have arrested his (Shah Rukh Khan's) son (Aryan Khan) and then demanded it,’’ he said.

An NCB team led by Sameer Wankhede earlier this month allegedly seized drugs onboard a cruise ship off the Mumbai coast following which Aryan Khan was arrested on October 3.

Reacting to claims of bribery made by NCB independent witness Prabhakar Sail against Sameer Wankhede, the Wankhede senior said Sail seemed thrashed and then forced to give such a statement.

“While talking Sail is coughing, drinking water. All these are signs of getting beaten up severely. Why was he quiet for so many days if he was made to sign some blank papers (after the alleged cruise ship raid by NCB officials)” he asked.

On Sunday, Sail, in a statement to the media, claimed that Rs 25 crore was demanded by an official of the NCB and other persons, including absconding witness K P Gosavi, to let off Aryan Khan in the drugs case.

Sail told media persons that he had overheard Gosavi telling one Sam D'Souza over the phone about a demand of Rs 25 crore and "to settle at Rs 18 crore as they have to give Rs eight crore to Sameer Wankhede".

Sameer Wankhede had categorically denied the allegations calling them as a bid to scuttle the probe in the drugs case.

Mumbai local trains to run at pre-pandemic level from THIS date, check details