TB remains to be one of the largest on India's health and wellness scale. 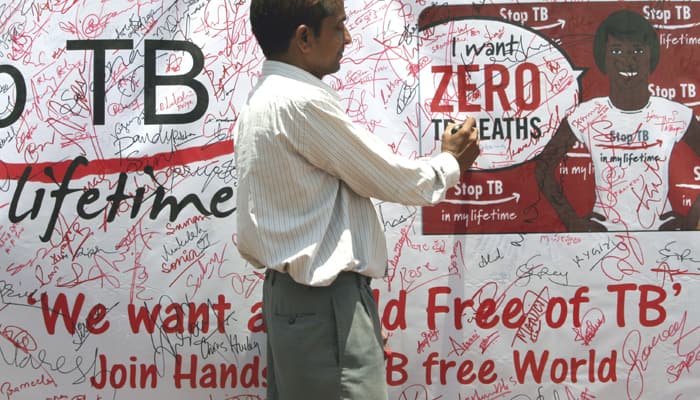 New Delhi: With as many as 3.3 million people suffering from one or the other type of tuberculosis and 276,000 succumbing to the disease, TB remains to be one of the largest on India's health and wellness scale.

India is also home to multidrug-resistant TB (MDR-TB) than any other country in the world. Last year, the country also recorded the highest number of TB cases in the world.

While tuberculosis is the biggest health issue that lies around India, but what makes the scenario worse is the newly and recently discovered global phenomenon of TDR-TB - Totally Drug-Resistant Tuberculosis.

TDR-TB is a generic term for TB which is resistant to all the first and second line TB drugs, making it almost but not totally impossible to treat.The situation in India is fairly alarming as the country accounts for 23 percent of the TB burden in the world.

Although there has been significant progress made in TB control, challenges remain and if left unchecked, the disease can become country's most serious health crisis as well as hamper the government's effort in fight against TB.

India has committed to achieving universal access to TB care with its campaign for a TB-Free India, which is part of the Global Challenge TB project funded by the United States Agency for International Development (USAID) and implemented by The Union.

Earlier this week and ahead of the World TB Day, the government of India has rolled out Bedaquiline, the first drug for multi-drug resistant tuberculosis.

But, the point is that government alone cannot solve India's 'ticking time bomb'. Ending TB can be achieved with greater collaboration within and across governments, and with partners from civil society, communities, researchers, the private sector and development agencies.

TB ranks alongside HIV/AIDS the world’s top infectious disease killer. But, TB is a treatable and curable disease. Public education and mass awareness about TB can help prevent spread of the disease.

The World Tuberculosis Day is observed on March 24 worldwide every year. Ahead of the World TB Day, the World Health Organization (WHO) called on countries and partners to 'Unite to End TB', which is the theme for this year. WHO and partners are promoting dialogue and collaboration that unites individuals and communities in new ways to end the tuberculosis epidemic.

Tuberculosis: Key facts and why you should know about it!