The great 'Sepoy Mutiny' of 1857 first sprouted the dream of Independence among the common masses of India, which witnessed a fierce movement for freedom from the ''British Raj'' during the span of 90 years. Many historical and unforgettable incidents took place during this period which are still remembered by the Indian people. Here is the list of some important places which played a pivotal role in the freedom movement and without which the story of India's Independence Movement is incomplete. 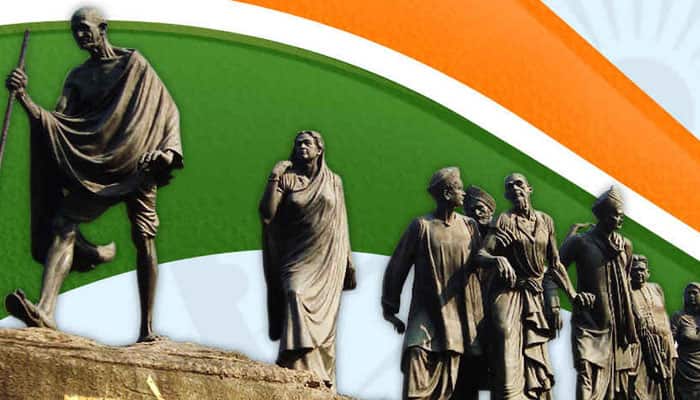 The great 'Sepoy Mutiny' of 1857 first sprouted the dream of Independence among the common masses of India, which witnessed a fierce movement for freedom from the ''British Raj'' during the span of 90 years. Many historical and unforgettable incidents took place during this period which are still remembered by the Indian people. Here is the list of some important places which played a pivotal role in the freedom movement and without which the story of India's Independence Movement is incomplete.

The famous armed rebellion of 1857 started from Barrackpore when Sepoy Mangal Pandey refused to follow the orders of his British commanders. Mangal Pandey was angered by the recent changes in British Army and especially by the introduction of paper cartridges that were used in 1953 Enfield Rifles. To load the rifle, the soldiers had to bite the cartridge and it was rumoured that the grease used on these cartridges were derived from beef, which was offensive to Hindus. When British Lt. Henry Baugh came to see the unrest, Pandey opened fire on him. In order to quell the rebellion, the British regiment officers ordered a manhunt for Mangal Pandey. However, the entire quarter guard and the sepoys refused to follow the order. Mangal Pandey was later caught, court-martialed and hanged on April 8, 1857. Barrackpore is also the oldest cantonment in India.

The city of Jhansi, also known as the City of Rani Lakshmi Bai, served as another place where the spark of ''Sepoy Mutiny'' reached and later turned into a war. Britishers had annexed the princely state of Jhansi under the policy of 'Doctrine of Lapse' thereby refusing to accept the adopted son of Rani as heir to the throne. When the war broke out, Jhansi became the center of the rebellion in central India. Rani Lakshmi Bai successfully saved the kingdom from the armies of the neighboring Rajas of Datia and Orchha who were loyal to British. She was defeated by the Company forces under the command of Sir Hugh Rose. Afterwards Rani with the help of Marathas captured the city of Gwalior. She died during the Battle of Gwalior (June 17, 1858). Many British commanders compared her with “Joan of Arc” for her fearless fight for kingdom.

Bombay was an important place during the Independence movement. Congress (now Indian National Congress) was founded in Bombay by Allan Octavian Hume. The first session of Congress took place in Bombay from December 28-31, 1885 and it was attended by 72 delegates. Womesh Chandra Banerjee presided over the first session of Congress. During its initial days, its main aim was “obtaining a greater share in government for educated Indians and to create a platform for civic and political dialogue of educated Indians with the British Raj”.

Calcutta, also known as the cultural capital of India, remained the center of Indian Nationalism throughout the Independence struggle. Indian National Association was the first nationalist organization that was founded in Kolkata by Surendranath Banerjee (Teacher of the Nation) and Anandamohan Bose. Many famous poets, writers, social reformers and nationalist were directly or indirectly associated with Calcutta. These great men, through their writings, speeches and work, strengthened the movement for India's freedom. It was the fear of growing 'nationalism' in Calcutta that Britishers had to shift the capital from Calcutta to Delhi in 1911. Important personalities from Calcutta during freedom struggle include - Rabindranath Tagore, Bankim Chandra Chattopadhyay, Aurobindo Ghose, Rash Behari Bose, Khudiram Bose, Subhas Chandra Bose and many more.

Mohandas Karamchand Gandhi's transformation into Mahatma Gandhi began from the Champaran Satyagraha, which was his first successful mass movement. Britishers at that time had forced Indian farmers to cultivate Indigo, which was used for dying cloths and not the food crops that was necessary for their survival. Cultivation of Indigo further worsened the condition of several poor farmers, many of whom later died of starvation. Raj Kumar Shukla, a money lander, persuaded Gandhi ji to visit Champaran and see the plight of poor farmers. Initially, British crown asked Gandhi to leave Champaran but he refused to do so and he was supported by prominent leaders. Finally, Champaran Agrarian Law was passed and the Britishers had to lift the ban. Champaran Satyagraha was the first successful Satyagraha on Indian soil.

Jallianwala Bagh is known for Jallianwala Bagh Massacre that took place on April 13, 1919. British Army Commander Reginald Dyer ordered his troops to fire on crowd of Baishakhi Pilgrims and non-violent protesters, protesting against the arrest of two leaders, Dr. Satyapal and Dr. Saifuddin Kitchlew. General Dayer arrived at the Jallianwala Bagh with sixty-five Gurkha and twenty-five Balochi and Pathan soldiers. Though he had also brought two Machine Gun armored cars but due to narrow entrance they were left outside. The Bagh had high walls and the main entrance was relatively wide but Dyer had guarded the wall with his troops. Dyer, without warning the crowd to disperse, ordered his troops to fire. Firing continued for nearly 10 minutes and it was stopped when ammunition supplies were exhausted. Approximately 1650 round were fired on innocent crowd leading to 379 deaths and 1200 wounded (British Government data). Other sources including Indian National Congress estimated the death count to be 1000 and more. The Jallianwala Bagh incident is regarded as a turning point in the freedom movement. Udham Singh, an Indian revolutionary, later assassinated Michael O’Dwyer in 1940 who had backed Reginald Dyer firing on innocent crowd.

Chauri Chaura is a small town in Gorakhpur district of Uttar Pradesh. It is famous for the Chauri Chaura Incident, in which the police first killed several peaceful demonstrators and, later an angry mob set an entire police station on fire thereby killing 22 policemen. Mahatma Gandhi, after Jallianwala Bagh incident, had called for a nationwide Non-Cooperation Movement. Its aim was to resist British Rule in India through non-violence and Satyagraha. However, after Chauri Chaura incident, Gandhi called off the movement because he thought that the movement had lost its non-violent nature. Gandhi was criticised for calling off the movement and many leaders who backed Gandhi now lost faith in him.

Kakori is a small town situated in the Lucknow district of Uttar Pradesh. This place is famous for Kakori Conspiracy that took place on August 9, 1925. Indian revolutionaries required money to carry out their activities and to win people's support for Hindustan Republican Association. They looted the train carrying money-bags belonging to the British Government Treasury. They looted some 8,000 INR but accidently killed one passenger making it a murder case. This incident shook the British Government as it was first case in the history when British property was looted. A massive manhunt was ordered and over a period of time nearly 40 revolutionaries were arrested. After the trial, which went on for nearly 2 years, main accused Pandit Ram Prasad Bismil, Thakur Roshan Singh, Rajendra Nath Lahiri and Ashfaqullah Khan were sentenced to death. Remaining conspirators were given life sentences for varying durations.

City of Lahore was one of the important centers of Independence movement. Though after the Independence it became part of Pakistan, several important decisions, events and activities had taken place here in the pre-Independence era. The 1929 session of Congress was held in Lahore and it was for the first time that ''Declaration of the Independence of India'' was passed on 31st December, 1929. During the Lahore session, the Tricolour was adopted as the national flag and January 26 was selected as Independence Day of India. Lahore also hosted many important sessions of Muslim League and the ''Two-Nation Theory'' by Md Ali Jinnah was also proposed in Lahore. Sardar Bhagat Singh, one of the most famous martyrs in the history of India's Independence, was hanged here.

Dandi is a village in Navsari district of Gujrat. It is famous for 'Dandi March', also known as 'Salt Satyagraha' started by Mahatma Gandhi. Due to increased tax on Indians, Gandhi started 'Satyagraha' to revolt against British. He used salt as a medium and said “next to air and water, salt is perhaps the greatest necessity of life.” Gandhi started 'Salt Satyagraha' on March 12, 1930 from Sabarmati Ashram in Ahmedabad and after a 24-day journey, covering 390-kms, he reached Dandi to produce salt without paying tax. Dandi March was one of the biggest movement that started after Non-Cooperation Movement and a large number of Indians joined participated in it. Dandi March had significant impact on changing the attitude of British and rest of the world towards Indian Independence movement.

DNA: Rahul 'fires' on Modi government on the pretext of Adani

DNA: When the British East India Company occupied the Awadh region in 1856

DNA: Videos of devastation caused by earthquake in Turkey will make you cry

DNA: Don't fall in the trap of fake job....use your intelligence