The pro-Kannada and farmer associations have called for 'Karnataka Bandh' on Saturday to protest against the Tribunal's interim order rejecting Karnataka's interim plea for sharing the Mahadayi river water with Goa. 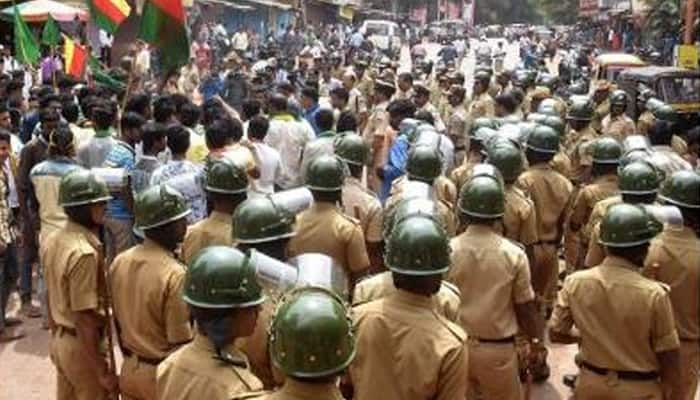 Bengaluru: The pro-Kannada and farmer associations have called for 'Karnataka Bandh' on Saturday to protest against the Tribunal's interim order rejecting Karnataka's interim plea for sharing the Mahadayi river water with Goa.

All commercial establishments, schools, colleges and government offices remained closed while no untoward activities reported yet.

Section 144 of the Code of Criminal Procedure (CrPC) has been imposed in Nargund, Navalgund, Hubballi and Dharwad towns.

Huge protests were witnessed on July 28 after Karnataka's petition seeking 7.56 tmcft for drinking water projects was rejected by a tribunal.

The Karnataka Film Chamber of Commerce (KFCC) has decided to halt screening of movies in theatres, movie-shooting schedules, and other film activities today.

The Mahaydai Water Disputes Tribunal, headed by JN Panchal, on Wednesday rejected the state's petition for 7.6 thousand million cubic feet (tmcft) of water from the river, citing various grounds, including ecological damage the project may cause.

On Thursday areas like Hubballi, Dharwad, Gadag, Haveri and Belagavi witnessed violent protests. Incidents of stone-throwing, burning of tyres and effigies and blocking of roads and highways by thousands of farmers, students and pro-Kannada activists were reported.

Schools, colleges and offices were closed due to the agitation.

Karnataka, which has locked horns with neighbouring Goa on the larger issue of sharing Mahadayi river water between both the states, had petitioned the tribunal seeking release of 7.56 tmcft of water for Kalasa-Banduri Nala project.

The project to supply drinking water to Hubballi-Dharwad, Gadag, Bagalkot and Belagavi districts from the river through Kalsa-Banduri canals in the Malabrabha basin has remained incomplete due to standoff between the two states since a decade.

As the 77km-long Mahadayi flows into Goa from Karnataka on the west coast into the Arabian Sea, the former has been objecting over sharing its water, as 52 km of its stretch is in its state and is a lifeline for its people.

According to a central water commission study, of the total (197-220 tmcft) water in the river basin, the yield in the state's catchment area is 44-53 tmcft. The state plans to use around 37 tmcft of its water for drinking water and hydel power generation.