That's guts! Watch how a small dog scares off bears

A small French bulldog in California's Monrovia area chased away three bears from its home. 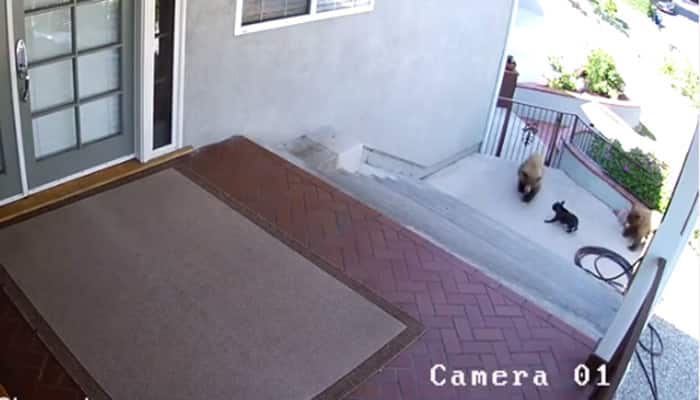 Monrovia: A small French bulldog in California's Monrovia area chased away three bears from its home.

The bears are believed to have ventured out because of a wildfire in the area. The video captured in the CCTV, placed inside the pet dog's owner's residence, shows how the little dog bravely scared away two bears believed to be a year-old each. As the mother bear was in the balcony she wasn't captured in the camera.

Jules, a 9 kg Bulldog, took her guard dog responsibilities seriously when the bears approached her family's property in Monrovia in California.

When two bears managed to make it into the garden in broad daylight, Jules responded - running at the bears, which were five times her size, without hesitation, and barking at them until they fled.

"It blew me away, I couldn't believe that she turned into a wolverine," homeowner David Hernandez was quoted as saying by the CBS LA.

"Jules didn't care how many bears there were or how big they were. She just chased two 45 kgs bears off," he added.

Two bears believed to be about a year-old wandered into the family's front yard. A third bear was on the balcony, just out of range of the camera.

Jules was rewarded for her courage with a bath, treat and plenty of affection from her grateful owners.

Hernandez said a wildfire in the area has affected the food supply in the the foothills for the bears meaning more have been coming down in search of food.

"There is nothing more dangerous in a forest than a mother bear, nothing," he said.