Amit Kumar and Suraj helped Telugu Titans reduce Bengal Warriors to just three men on the mat, but a picture-perfect Thigh Hold from Mohammad Nabibakhsh on Siddharth levelled the scores yet again. 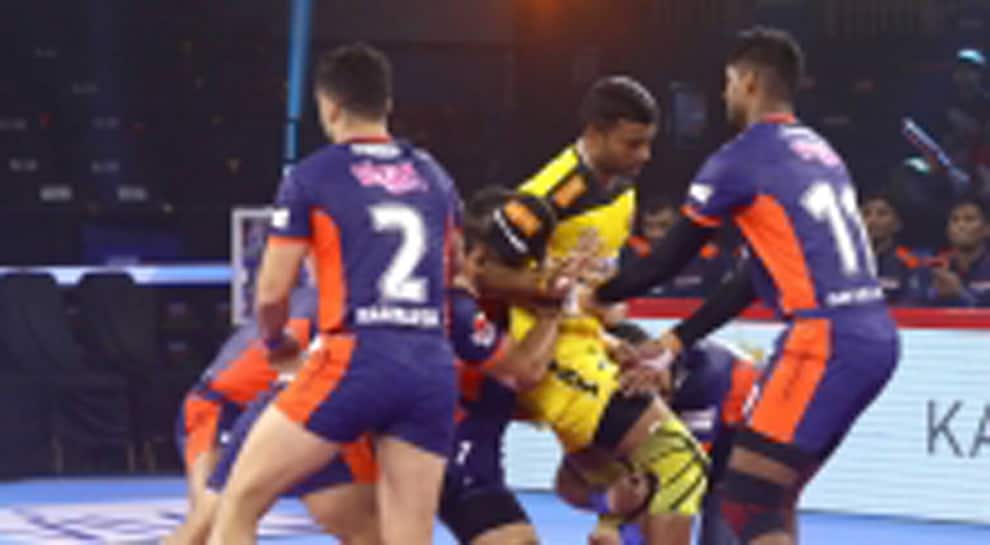 An intense battle between Bengal Warriors and Telugu Titans eventually finished in a 29-29 tie at the EKA Arena by TransStadia here on Monday. This was the fifth tie between these two sides, making this the most tied fixture in the history of Pro Kabaddi.

Telugu Titans, courtesy of their defence and the Desai brothers - Suraj and Siddharth, got off to a strong start and took an early two-point lead in the contest. They maintained that lead till midway in the first half, but a run of unanswered points from Bengal Warriors levelled the scores at 7-7.

Amit Kumar and Suraj helped Telugu Titans reduce Bengal Warriors to just three men on the mat, but a picture-perfect Thigh Hold from Mohammad Nabibakhsh on Siddharth levelled the scores yet again.

Telugu Titans' Farhad Milaghardan put his team back up by one with a tackle on Maninder Singh, but Nabibakhsh showcased his all-round ability and levelled the scores with a touch point on Amit Kumar.

In the final moments of the half, Suraj was Dashed out, but a review from Telugu Titans revealed that the raider had stepped out of bounds before getting a touch on a defender. This meant that Suraj, along with three defenders that entered the lobby, were rendered self-out and the two teams headed into the half-time break with the southerners leading 13-11.

Telugu Titans inflicted the All-Out and took a five-point lead at the start of the second half. But Bengal Warriors responded to the setback by scoring three unanswered points to get some momentum on their side. A couple of minutes later, Rinku Narwal's brilliant Back Hold on Siddharth followed by a Nabibakhsh two-point raid not only levelled the scores but reduced Telugu Titans to just a lone man.

Baldev Singh tackled the raider and inflicted the All-Out as Bengal Warriors took the lead for the first time in the contest. That lead, however, did not last long as Telugu Titans' defence levelled the scores and Siddharth put them up by one point with seven minutes left in the contest. K. Prapanjan and Nabibakhsh then scored a raid point each to put Bengal Warriors in the lead, but Telugu Titans' defence came up clutch yet again, tackling the latter in his subsequent raid to level the scores.

In the final minute of the contest, Armaan came in to raid and successfully scored a bonus before being tackled by Narwal as each team earned a point and the scores remained level. Given the precarious nature of the contest, neither Maninder nor Suraj ventured too deep into the opposition half in the final two raids of the contest and the clock expired, confirming another tie between these two sides.