Bengal Warriors produced an outstanding performance to beat Dabang Delhi 39-34 to clinch the Pro Kabaddi League Season 7 title for the first time in front of a packed audience at the EKA Arena here on Saturday. 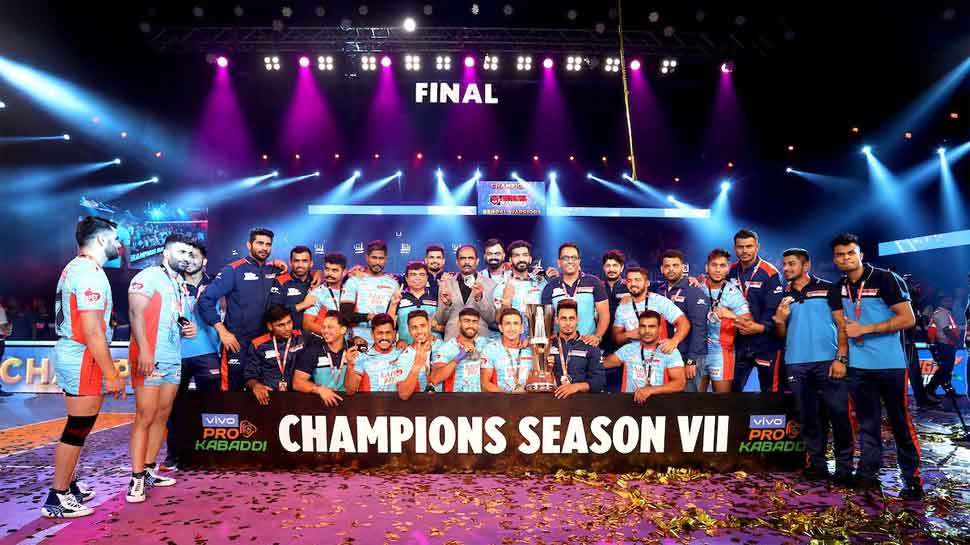 Ahmedabad: Bengal Warriors produced an outstanding performance to beat Dabang Delhi 39-34 to clinch the Pro Kabaddi League Season 7 title for the first time in front of a packed audience at the EKA Arena here on Saturday.

Bengal`s consistency in the most fiercely-fought season of PKL got rewarded by a composed performance by the team, led by stand-in captain Mohammad Nabibakhsh`s 10-point game.

Naveen Kumar was brilliant once again with 18 raid points for Delhi but uncharacteristic errors in the night cost the team the title. The Warriors did not have the services of star raider and captain Maninder Singh in the night but got his support with his presence as assistant coach from the sidelines.

That, or the pressure of the final, got to the Warriors in the early minutes as Delhi stormed to a 6-0 lead. Naveen Kumar certainly looked charged up for the event while Delhi`s cover combination of Anil Kumar and Vishal Mane also seemed keen to stop any raider coming their way.

The Delhi side clinched their first All-Out in the 8th minute to open a four-point lead but the Warriors were a different side after the restart. Mohammad Nabibakhsh picked up his game, clinching valuable raid points, as Warriors quickly reduced Delhi`s lead.

Delhi`s Iranian MerajSheykh impressed as a substitute, picking up two raid points in pressure situations, but the Warriors secured their first All-Out with under 4 minutes remaining for the break. The closely-contested first-half ended with the scores levelled at 17-17.

Warriors maintained that momentum in the second half as they quickly got into the lead. Sukesh Hegde once again sizzled for the Warriors with some mature raiding, often getting the better of Ravinder Pahal in Delhi`s left corner.

Perhaps the smartest move from the Bengal camp was to deploy the experienced Jeeva Kumar in a shifting cover role, depending on the raider`s strong foot. The decision helped as Warriors clinched another All-Out in the 8th minute of the half to open-up a 4-point lead.

Delhi`s Naveen Kumar clinched his Super 10 in the 10th minute (21st consecutive) but his team struggled to get a stranglehold of the match with Warriors` corner combination of Rinku Narwal and Baldev Singh also getting into the game.

Warriors inflicted another All-Out with 6 minutes remaining to open-up a 10-point lead. Naveen Kumar kept trying to script a comeback for the Delhi side, hitting the 300-point milestone in the process, but his work continuously got undone by uncharacteristic errors in the defence with the likes of Joginder Narwal and Ravinder Pahal struggling.

The Warriors` defence held tight in the final minutes to secure their maiden PKL title.