The win, Steelers' fifth in six matches, pushed the Haryana team to fifth place in the points table. 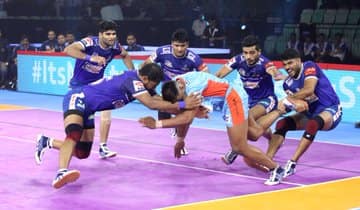 New Delhi: Vikash Kandola once again starred for Haryana Steelers as they overcame a stiff challenge from Bengal Warriors to win 36-33 in a Pro Kabaddi League Season 7 match at the Thyagaraj Sports Complex here on Monday.

The high-scoring contest belonged to the raiders with Kandola and Maninder Singh of Bengal Warriors securing Super 10s, which is awarded to raiders who score 10 or more raid points, as the defenders struggled to get a stranglehold of the match.

But Warriors' K. Prapanjan had other plans, as he succeeded in a four-point Super Raid in the sixth minute to sway the match back in Warriors' favour.

Warriors then used the momentum to inflict the first All-Out of the match on Steelers in the 11th minute. But despite the All-Out, Steelers remained in the game thanks mostly to the raids by Kandola, who also reached a personal milestone of 300 raid points in PKL.

The high-scoring first half, which saw both defences struggling to find a successful tackle, ended with Steelers leading 18-17.

Steelers got their first All-Out in the second minute after restart to open up the lead, but both defences continued to struggle as the raiders had a great day on the mat.

Kandola raced to a Super 10 in the 5th minute of the second half while Maninder got his in the subsequent raid for the Warriors. The Warriors raider also crossed 500 points in PKL, as the Bengal side reduced Steelers to just two men on the court.

But the experienced Dharmaraj Cheralathan produced a mighty Super Tackle with less than six minutes to go to prevent what had looked a certain All-Out. The 44-year-old kabaddi stalwart steadied the defence in the dying minutes of the match to secure an important win for the Steelers.

The win, Steelers' fifth in six matches, pushed the Haryana team to fifth place in the points table.