The home leg curse continued as Thalaivas ended their home run with three losses and a solitary draw. 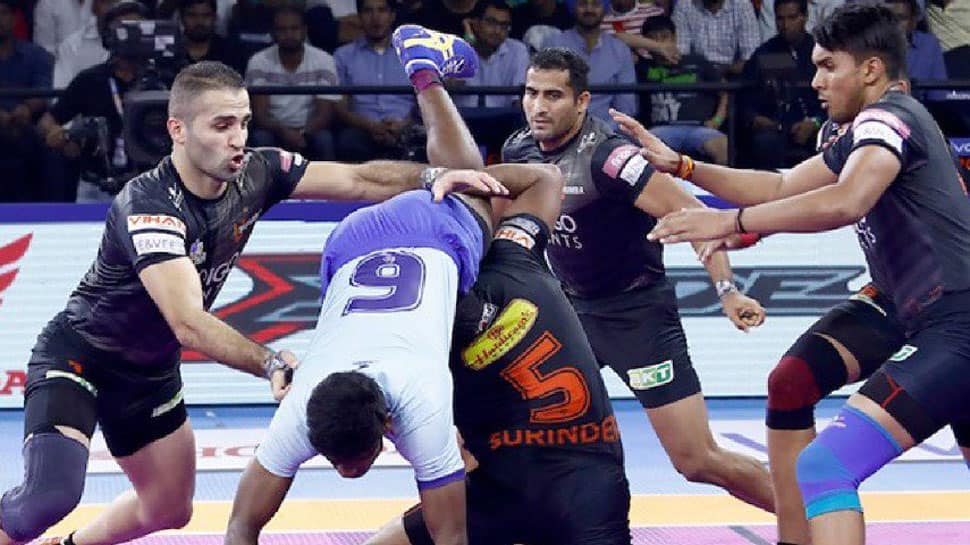 The Chennai leg of the Pro Kabaddi League Season 7 concluded with U Mumba registering a 29-24 win over Tamil Thalaivas at the Jawaharlal Nehru Indoor Stadium on Friday.

The home leg curse continued as Thalaivas ended their home run with three losses and a solitary draw. The home fans were up to a treat in the first minute when Mohit Chillar tackled Abhishek Singh in the opening raid of the match.

Rahul Chaudhari took out Surinder Singh in his first raid before pulling off a two-point raid in his next. A successful Do-or-Die raid by U Mumba's Athul MS and an unsuccessful one by the opposition's V Ajith Kumar meant Tamil Thalaivas' early lead got reduced.

The margin finally got erased when Sandeep Narwal tackled Rahul and Abhishek raided Vineet Sharma. However, 'Iceman' Ajay Thakur brought the home team back into the game when he got a single touchpoint each on his next two successive raids.

Mohit Chhillar's resilience in defence and subsequent raids by V Ajith Kumar and Rahul saw Tamil Thalaivas take an unassailable 12-6 lead. But, U Mumba refused to give up and a Super Tackle by Harendra Kumar and triumphant raids by Abhishek Singh forced the scoreline to only 12-10 at halftime.

The second half was a stark contrast to the first one as U Mumba got the lead for the first time in the contest when Athul MS took out Rahul Chaudhari and Ran Singh in a single raid.

Riding on the confidence, Athul cleaned up Tamil Thalaivas to inflict the first All-Out of the match. The scoreline read 19-15 then and U Mumba extended the margin to seven points thereafter.

However, costly errors like Abhishek Singh timing himself out gave Tamil Thalaivas a glimmer of hope to mount a comeback. But, their hard-tackling defence dashed those aspirations with the scoreline reading 24-28 in U Mumba's favour in the final minute of the match.

V Ajith Kumar ran straight into Fazel Atrachali and Abhishek Singh killed the time in the final raid of the contest to ensure U Mumba walked out of it with an impressive victory.