In the video, looking dapper in black blazer and shirt along with matching pants, the `Zero` actor expressed his gratitude over the award and thanked the Kingdom of Saudi Arabia for showering love on him. 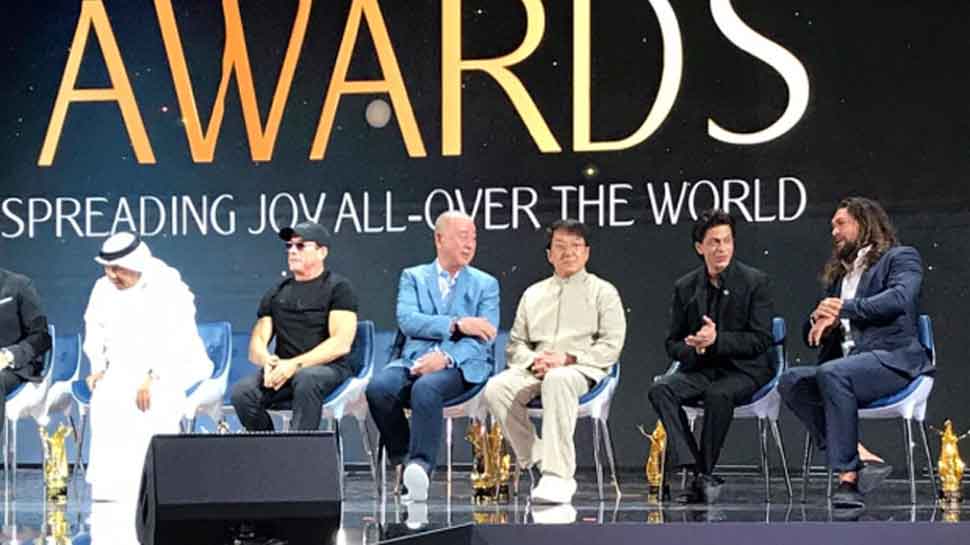 The official handle of Turki Alalshikh, Chairman of the General Entertainment Authority shared the video on Twitter.

In the video, looking dapper in black blazer and shirt along with matching pants, the `Zero` actor expressed his gratitude over the award and thanked the Kingdom of Saudi Arabia for showering love on him.

"I was just talking about the hospitality, the warmth and the goodness that has been showered upon us with my fellow colleagues, Jackie Chan, Jason Momoa, and Jean-Claude Van Damme. And for most of us this is our first trip to the Kingdom of Saudi Arabia, so thank you, people, for giving us that love," he said in the video."We all wait with bated breath as cinema has expanded here in the kingdom of Saudi Arabia. You have so many new stories to tell, and we as the world look forward to being in any way in terms of technology, in terms of any stuff that you need for filming and general entertainment," added Khan while talking about the expansion of cinema in Saudi Arabia.

Apart from the megastar, action hero Jackie Chan was also one of the honourees at the Joy Forum.

The legendary actor, director and singer for whom it was his first visit to Saudi Arabia, thanked people for their love and also promised to come back to the place with some action projects.

"I know most of you have seen my films growing up. I have been making films for 59 years and I can say I am still young. All those years I made action comedy because I like to make people laugh and bring a smile on their face. But we always give a message inside any film, which is about love. I have moved around the city and have seen several locations and I hope I return next time with my crew," the martial arts pro said in the video.

Earlier on Sunday, Shah Rukh shared a selfie with his friends Jackie and Van Damme in which the trio is all smiles.

Khan, Damme, Chan at the #JoyForum19. The joys all mine as I got to meet my heroes. @jcvd @jackiechan @joyforumksa

While the 53-year-old actor is clad in chateau grey tuxedo, Jackie Chan and Jean-Claude Van Damme are dressed in a grey turtle neck outfit and simple blue tee, respectively.

Shah Rukh also met `Aquaman` actor Jason Momoa at the star-studded event. Other than this, the actor also revealed the trailer of his appearance in a special episode with popular American TV host David Letterman.

He will be appearing as Letterman`s next guest on his popular Netflix talk show `My Next Guest Needs No Introduction`.