In a watershed moment for cricket, on this day, eight years ago, MS Dhoni-led India won the first ever Twenty20 World Cup defeating arch-rivals Pakistan in a thrilling final by five runs at Johannesburg's Wanderers Stadium. 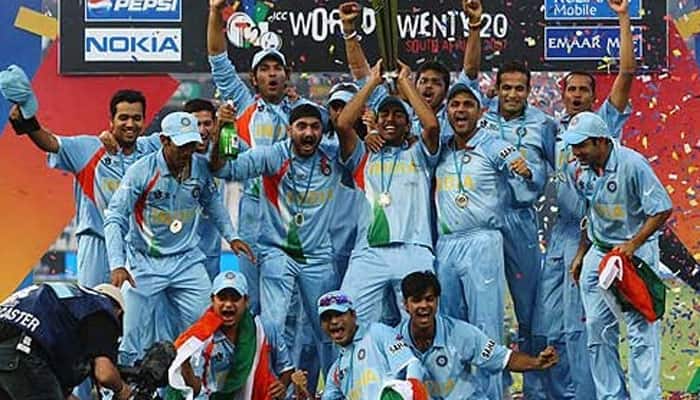 The tournament was a watershed moment for the sport, which was facing an uncertain future with dwindling fortunes against the back-drop of restless and impatient followers, who mostly hailed from the Indian subcontinent – cricket's proverbial base.

But the slam-bang version of cricket, an Olympic spot worthy event, arrived just in time to start a boom in the so called gentlemen's game, shedding many a stereotypes, allowing many followers of modern world to once again watch it without time-constraints.

In the run up to the finale, the tournament had already witnessed epic clashes and many individual exploits, like that of Yuvraj Singh's six sixes off English bowler Stuart Broad, thus establishing this new event as the ultimate format to carry the game forward. And with India and Pakistan playing the final, the 2007 Twenty20 World Cup was the zenith of cricket's success.

Having played out a newly invented super over to decide the winner just ten days ago, cricket's best rivalry once again was ready for yet another epic clash. Dhoni, who himself was looking to encapsulate a burgeoning career with a world title, won the toss and opted to bat first.

Opener Gautam Gambhir, once again, played a rock-solid innings to guide the Indian innings, which at times, was looking to crumble with Pakistan paceman Umar Gul producing the goods. Gambhir's 75 runs from 54 runs laid the foundation for a challenging total of 157 for 5. His knock was supported by a 30-run blitz off 16 balls by Rohit Sharma. Gul, for his efforts, returned with three wickets, those of Gambhir, and the dangerous pair of Yuvraj and skipper MS Dhoni.

That Indian team, under Dhoni, was a different beast to contain with. A young team, perfectly moulded for a slug-feast like a T20 final. But in the Pakistani ranks, there was a certain Misbah-ul-Haq. The ice-cool campaigner, with an array of shots to destroy any bowling attack.

Despite Misbah's super-human efforts, Pakistan found themselves five runs short off the target and once again, they tasted World Cup defeat against the Indians.

Pakistan needed 13 from the last over, bowled by an untested Joginder Sharma. Joginder started off with a wide delivery and followed it with a dot ball. Misbah, batting with the last man Mohammad Asif, hit the second legal delivery for a six, but the very next delivery, the Indian bowler got his prized wicket, thanks to a calm Sreesanth catch at short fine-leg.

And India won their first World title after 1983.

But the hero of the final was Irfan Pathan, whose four-over spell – three wickets for just 16 runs – made sure that India successfully defended that tricky total of 157 runs.

It paved the way for the start of a franchise-based T20 cricket tournament in India, which came to be known as the Indian Premier League.

Kumar Sangakkara registers another century for Surrey in County Championship