Mohun Bagan's Trinidad and Tobago striker Cornell had charged that Mondal hurled a racist remark at him during the Kolkata Derby in Siliguri last Saturday. 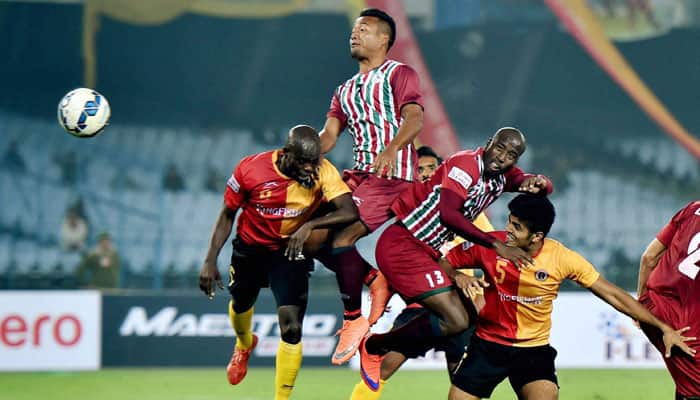 New Delhi: East Bengal on Saturday suffered a blow in their quest for I-League title as their key defender Arnab Mondal was suspended by All India Football Federation for two matches for using "aggressive/abusive words" against Mohun Bagan striker Cornell Glen during the Kolkata derby in Siliguri last week.

The AIFF Disciplinary Committee took the action against India international Mondal on the basis of a complaint lodged against him.

Mohun Bagan's Trinidad and Tobago striker Cornell had charged that Mondal hurled a racist remark at him during the Kolkata Derby in Siliguri last Saturday, which East Bengal had won 2-1.

Mohun Bagan, the defending I-League champions, had made a complaint to the AIFF and Mondal was served a showcause notice.

But the AIFF Disciplinary Committee found Mondal guilty of using "aggressive/abusive words" only and not for any racial remarks. He will also have to cough up Rs 1 lakh as fine and payable within seven days.

"Arnab, who was found guilty of using aggressive/abusive words against Cornell Glen, is suspended for next two matches in I-League and he is liable to pay a fine of Rs. 1,00,000 within seven days," the AIFF said in a release.

"Arnab, who has also led the national team, is also cautioned by the disciplinary committee," it said.

The AIFF Disciplinary Committee also suspended Mohun Bagan assistant coach Shankarlal Chakraborty who was given marching orders by the referee during the derby match. Chakraborty, who was standing-in for head coach Sanjoy Sen in that match, protested against a penalty given by the referee in favour of East Bengal.

Sen has returned at the helm of affairs after serving a four-match ban for criticising the AIFF.

"Shankarlal Chakraborty, the assistant coach of Mohun Bagan, was given the marching order by the referee at the Kanchenjunga Stadium on 2nd April as he was found to be using offensive language against the officials," the AIFF said.

"Shankarlal has been suspended for two matches in Hero I-League as well as he has to pay a fine of Rs. 50,000/- within seven days. Shankarlal Chakraborty, who has also represented Mohun Bagan and East Bengal in his short career, is cautioned by the disciplinary committee from committing such mistake in future."