On Day 1 of Jallikattu, 48 bull-tamers injured

At least 48 bull tamers, participating bull-taming sport 'jallikattu' held at Madurai's Palamedu in Tamil Nadu as part of the Pongal festivities, were injured on Wednesday. Out of the 48, 14 are seriously injured. 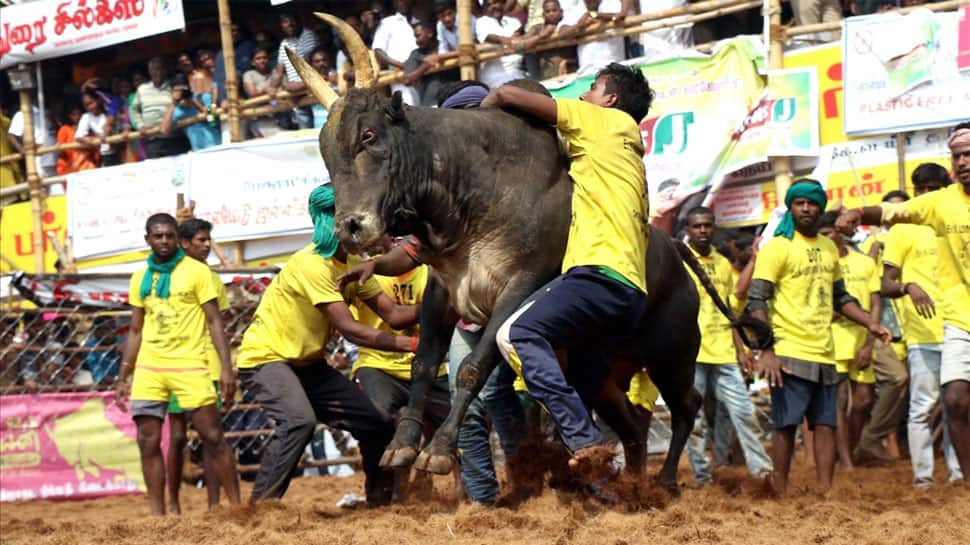 MADURAI: At least 48 bull tamers, participating bull-taming sport 'jallikattu' held at Madurai's Palamedu in Tamil Nadu as part of the Pongal festivities, were injured on Wednesday. Out of the 48, 14 are seriously injured.

To aide rescue services, the Indo-Tibetan Border Police (ITBP) has set up a medical camp near a Jallikattu venue in Madurai.

“We have a team here so that we can give first aid treatment to the injured.If there is more emergency,patients will be sent to nearby govt hospital by us,” said Dr Praveen, Medical Officer, ITBP Madurai.

"Jallikattu event organised in Palamedu and Alanganallur are world famous. In Palamedu, all the villagers unitedly take part and organise the event. It is an example of unity. We performed puja and left the temple bulls in the venue. Thereafter, we begin the actual Jallikattu where bulls from various parts are left in the venue for taming," he explained.

Though 602 bulls were chosen to take part in the sport, 125 bulls were not allowed to participate for different reasons.

The first prize - a car - went to a bull owned by Prabhu as it could not be tamed by anyone.

Prabhakaran got the first prize for taming the maximum number of bulls while Ajay and Kathick won the second and third prize respectively.

Various organisations, including the People for the Ethical Treatment of Animals (PETA) and Animal Welfare Board of India (AWBI) had vehemently opposed the tradition, stating that it was a cruel event.
The festival was banned by the Supreme Court in 2014 after complaints of extreme animal cruelty. However, Tamil Nadu enacted a law in 2017 to bypass the top court`s verdict, owing to massive protests challenging the ban of the event.