Bigg Boss season 11, day 39 began with a war of words between Mehjabi and Hina Khan. After that, Puneesh, Mehjabi and Sabhyasachi were discussing about how Hina doesn't let anyone speak. 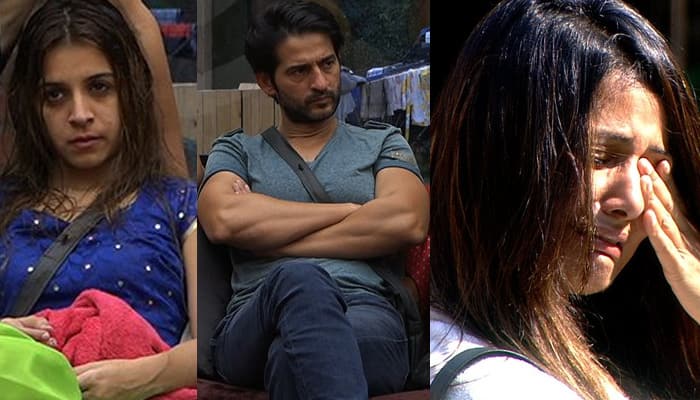 New Delhi: Bigg Boss season 11, day 39 began with a war of words between Mehjabi and Hina Khan. After that, Puneesh, Mehjabi and Sabhyasachi were discussing about how Hina doesn't let anyone speak.

Around 1 PM, Hina broke down in tears yet again and was heartbroken about the fact that everyone blames her for everything. Luv, Benafsha and Priyank came to console her in the garden area.

Bigg Boss gathered all contestants in living area and announced that it was now time to select the contestants who would be sent to Kal Kothri.

Since Benafsha showed violence inside the house two days ago by pulling Akash's hair, she was sent to the Kal Kothri. Not only this, Bigg Boss nominated Benafsha for next week as a punishment for her inappropriate behaviour.

After much 'discussion', the housemates couldn't come to a conclusion. Since the housemates weren't able to decide, it was upto Arshi, Bandgi and Akash to decide whom to send since they are the captaincy contenders. The trio named Hiten and Hina who were rather disappointed when they came to know about the decision.

Vikas was upset over a joke that Luv made on the latter's expense. Even though Luv apologised, it did nothing to change Vikas' mood.