Pouille continued his remarkable run at Melbourne Park by stunning in-form Canadian Milos Raonic to set up a showdown with top-seeded Novak Djokovic for a place in Sunday's final. 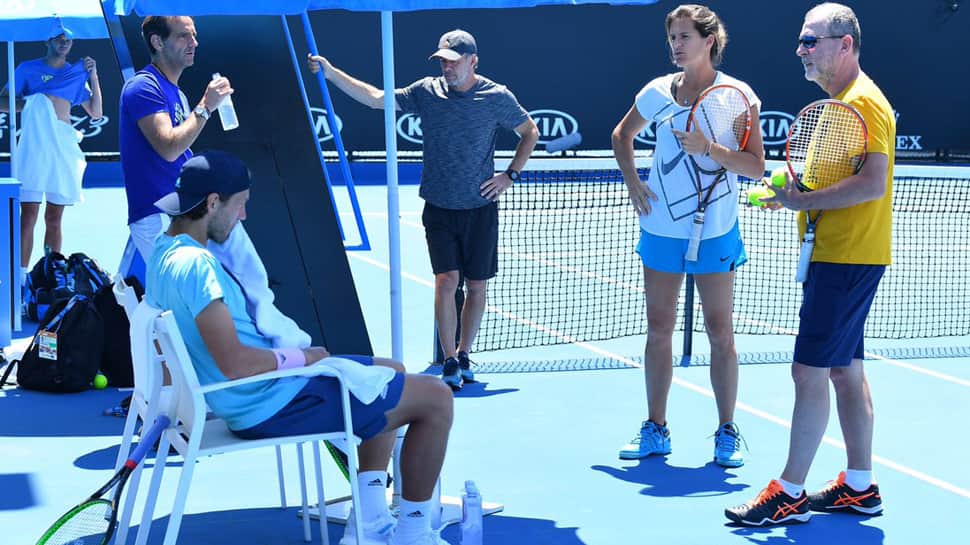 Lucas Pouille lost his motivation after poor results saw him slip out of the world's top 10 in 2018 but with Amelie Mauresmo as his new coach, the Frenchman has roared back to reach his maiden Grand Slam semi-final at the Australian Open.

Never give up!!!! So happy to be through after such a battle! Incredible atmosphere out there, you guys rocked! Off to the 4th round at the @AustralianOpen alleeeeeezzzz ! Also I think my coach @AmeMauresmo is happy, can you tell?  #AllTheFeels ( @antoinecouvercelle) pic.twitter.com/EW0fIUb7g8

Pouille continued his remarkable run at Melbourne Park by stunning in-form Canadian Milos Raonic 7-6(4), 6-3, 6-7(2), 6-4 to set up a showdown with top-seeded Serb Novak Djokovic for a place in Sunday's final.

The French connection @la_pouille has been playing out of his mind with new coach @AmeMauresmo.#AusOpen pic.twitter.com/iln27GDI8B

The 24-year-old was ranked 10th by the ATP last March but dropped to 32 by the end of October and was suffering from a lack of enthusiasm for the sport.

"I played tennis for 16 years. It was the first time that it happened to me, I lost that joy being on the court, lost the joy going to practise, practise hard," the 28th seed told reporters.

He added, "I don't know really why it happened, it did. Then you lose one match, two matches, three matches, then you lose confidence. It's tough to come back when you don't enjoy it."

Pouille needed time to think about his future as a professional player and rediscover his motivation.

"I said, okay, you have maybe 10 more years on tour. Do you want to spend them like this or do you want to enjoy it? To enjoy playing on the biggest courts of the world in front of some unbelievable crowds, achieve some great goals, great titles," he explained.

"I said, okay, now you have to move your ass a little bit and go back to it. Even if you don't want to practise one day, don't do it. Just do it when you want. That's how it came back," he further explained.

One of the things he did was approach former Australian Open and Wimbledon champion Mauresmo, who decided against taking over as captain of France's Davis Cup team, to be his coach.

"I think she`s bringing a lot of confidence to my game, to my personality, to my state of mind," Pouille said of his compatriot, who had previously coached Britain's Andy Murray.

He further said, "The goal is not to reach the final, the semi-final, the goal is to improve my tennis, to put what I work on during the practice in the match. That gives me less pressure."

Pouille arrived in Melbourne after losing all three of his singles matches for France in the Hopman Cup before making a first-round exit at the Sydney International.

He had exited in the first round in his five previous appearances at the Australian Open and his quarter-final matchup was against an opponent who he had been unable to take a set off in three meetings.

"Coming here the goal was let's try to be in second week or quarter-final. It was really to take (it) step by step and try to focus on my game," Pouille said.

"I think if I asked someone, what did you think I would do I'm not sure someone would have said semi-final or maybe more. There was some low expectation from outside of my team, even from myself," he concluded.