US Open 2021: Novak Djokovic 5 steps away from calendar Slam, eases into Round 3

Novak Djokovic took another step toward completing the first calendar-year Grand Slam in men’s tennis since 1969 and claiming a 21st major championship to eclipse the mark he shares with Roger Federer and Rafael Nadal. 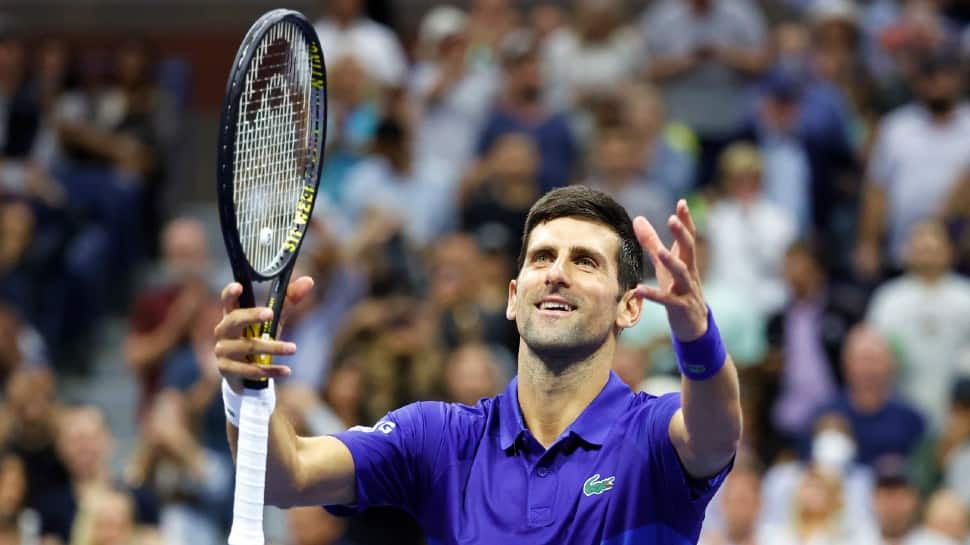 World No. 1 Novak Djokovic celebrates after entering Round 3 of the US Open 2021 tennis tournament. (Photo: Reuters)
Share:
Written By:

Novak Djokovic missed an overhead and stared over toward a section of the Arthur Ashe Stadium stands. After taking the next game, Djokovic glared in that direction again. Later, he spoke to the chair umpire about someone making noise in the middle of points, considered a no-no in tennis.

That, then, is pretty much what provided some intrigue and interest for Djokovic’s second-round match at the US Open, because the ultimate outcome seemed fairly obvious after all of about 15 minutes on Thursday (September 2). Or maybe even before he and his 121st-ranked opponent stepped on court on a cool, breezy evening.

And that, surely, pleased Djokovic as he took another step toward completing the first calendar-year Grand Slam in men’s tennis since 1969 and claiming a 21st major championship to eclipse the mark he shares with Roger Federer and Rafael Nadal. What Djokovic wasn't thrilled by during a 6-2, 6-3, 6-2 victory over Tallon Griekspoor was some of the distractions arriving during the run of play.

“I came out on the court with the right intensity, with the right focus. Definitely was a better performance from my side than a couple of nights ago,” the No. 1-ranked Djokovic said, referring to his win Tuesday, when he dropped a set and was taken aback by hearing what he thought were boos but actually were last-name chants of “Ruuuuune!” for his 18-year-old foe, Holger Vitus Nodskov Rune.

Here’s what matters the most: Djokovic is 2-0 at Flushing Meadows this week and 23-0 in Grand Slam tournaments this year, with five more wins standing between him and history. “I am motivated as ever to do well,” said Djokovic, a 34-year-old from Serbia who will face 2014 US Open finalist Kei Nishikori next. “I am trying to be the best I can be every single day and let’s see what happens.”

This was only the fourth Slam match for Griekspoor, a 25-year-old Dutchman who tends to appear on the lower-level ATP Challenger Tour. And he never really stood much of a chance against Djokovic, who broke to lead 3-1 and was on his way.

Djokovic dominated every statistical category. He served well, to the tune of 13 aces. He serve-and-volleyed occasionally. He returned well enough to win half of Griekspoor’s service games. He dominated baseline exchanges.

About the only problems No. 1 Ash Barty and other top women encountered earlier Thursday came in the delays trying to get to Flushing Meadows in the aftermath of Hurricane Ida's remnants blowing through the Northeast a night earlier.

Barty, a two-time major champion including at Wimbledon in July, three-time Grand Slam champ Angelique Kerber, Tokyo Olympic gold medalist Belinda Bencic, double Wimbledon title winner Petra Kvitova and other seeded women including No. 14 Anastasia Pavlyuchenkova, No. 17 Maria Sakkari, No. 23 Jessica Pegula and No. 28 Anett Kontaveit all won in two sets during the afternoon to reach the third round.

Among the men's winners were Summer Games gold medalist and 2020 US Open runner-up Alexander Zverev, 2021 Wimbledon finalist Matteo Berrettini, No. 17 Gael Monfils and No. 22 seed Reilly Opelka of the US.