Goffin will wonder about what happened after he looked the better player in the early stages and broke for a 4-3 lead in the first set. 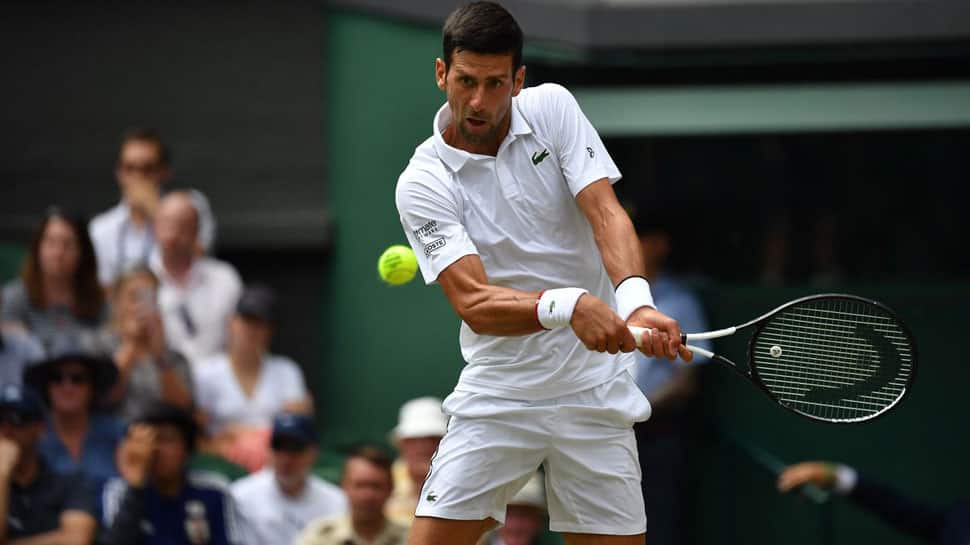 Top seed Novak Djokovic recovered from an edgy start to deliver a devastating display that crushed the spirit of 21st-seeded Belgian David Goffin in straight sets on Wednesday and sent the defending champion surging into the Wimbledon semi-finals.

Goffin will wonder about what happened after he looked the better player in the early stages and broke for a 4-3 lead in the first set. Half an hour later he had lost 10 games in a row and the match was effectively over as Djokovic, relentless with his accuracy, went on to triumph 6-4 6-0 6-2.

The Serb was at his clinical best as he soaked up the early punches without panic then slowly but surely imposed himself in every aspect of the contest to such an extent that Goffin was left flailing on Centre Court.

Djokovic, who has lost only once at a Grand Slam in the last 12 months, is into his ninth Wimbledon semi-final – only Jimmy Connors and Roger Federer have been in more – where he will face either Guido Pella or Roberto Bautista Agut, and will be confident of making Sunday`s showdown.

The world number one has reached the last four having lost one set and been broken only five times in five matches and was delighted with how Wednesday`s match eventually unfolded.

"He (Goffin) started well and was dictating the play from the baseline," he said. "Things could have gone a different way, who knows what the match would have looked like if I had lost the first set? But I was very pleased with the second and third."

"I had a tough match in the third round (against Poland`s Hubert Hurkacz). Other than that, I`ve won in straight sets and played really well throughout the tournament. It`s exactly what I wanted and hopefully, I can go in the right direction in the semis as well."

It is not an uncommon pattern for the outsider to come out swinging and look dangerous, only to fall away, but the contrast was particularly extreme on Wednesday.

Goffin’s Grand Slam record against top 10 players is dire, with only one win now in 13 attempts, but he knows Djokovic well as one of his regular practice partners and did win their last meeting, albeit on the clay of Monte Carlo two years ago, having lost the previous five.

The Belgian was clearly the better player for much of the first set and, though Djokovic saved break points in early games he could not prevent Goffin cashing in on more in the seventh as, showing great court speed, he broke for 4-3.

The crowd settled down for what they thought might be a classic battle – but it proved to be almost the end of the line for the Belgian. Djokovic started to find his return range and broke back immediately, held without trouble and broke again via a double fault to bag the set.

Goffin, from dominating the rallies, was suddenly having to work desperately hard to stay in them, usually failing. As Djokovic’s accuracy improved, particularly his service returns, his opponent’s slipped dramatically and he played a horror game to lose serve again to love and slide to 4-0 down, and then quickly 6-0 in the second set.

Goffin then received what all pros must hate – the Centre Court sympathy clap – when he stopped the rot by holding serve for 1-1 in the third set. But he was barely going through the motions after that as the Serb cruised through to finish things off in less than two hours.